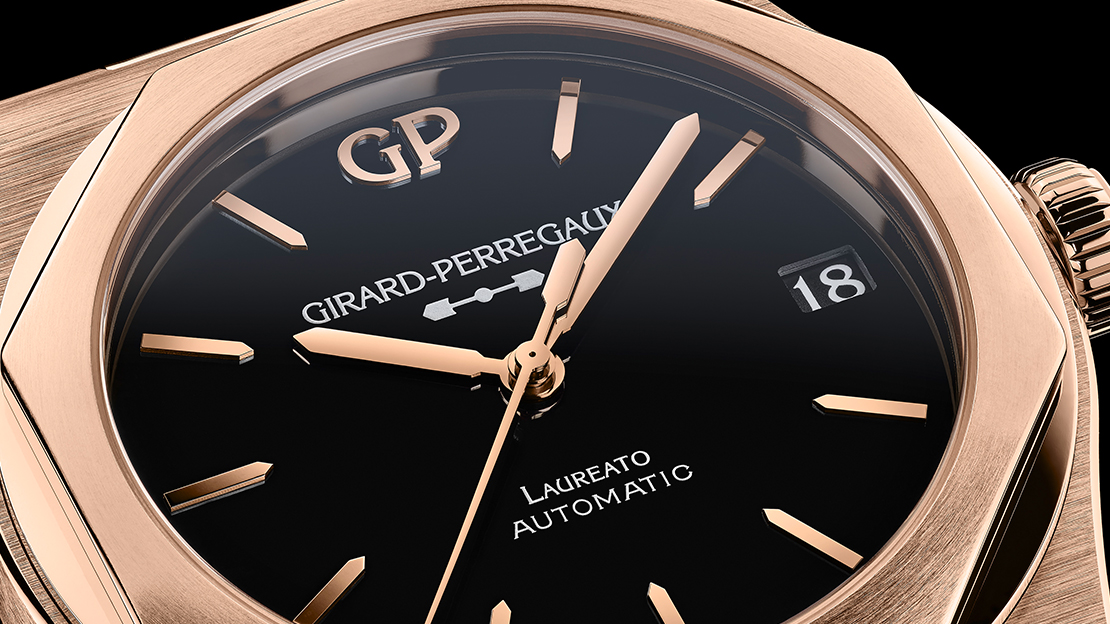 When the Laureato was originally launched in 1975, it won the hearts and minds of design afficionados and watch collectors alike. While other contemporary watches have come and gone over the years, only a handful have endured, the Laureato being one of them. Now, the Maison is pleased to unveil a new addition to the Laureato family, the Girard-Perregaux Laureato 42mm, a timepiece housed in a pink gold case, paired with a handcrafted black onyx dial and equipped with an in-house mechanical movement.

An enduring design
In terms of design, the 1970s were extraordinary. Creativity imbued a variety of objects with timeless aesthetics and notable functionality. This prowess for design was manifest with the styling of several highly original watches and the era continues to be acknowledged for its visionary approach to design. Indeed, during this era, several prestigious brands released watches encased in steel with integrated bracelets. However, only a few designs from this period have retained their eye appeal despite the onset of years. Launched in 1975, the Girard-Perreqaux Laureato remains timeless and continues to elicit covetous thoughts.

From the outset, the design of the Laureato united a number of different shapes to form a distinctive, yet cohesive, look. Each Laureato comprises an octagonal bezel that sits atop a circular ring which in turn is positioned above an angular tonneau-shaped case. But despite having geometric, clean-cut lines, the Laureato also has a gentle character, reminiscent of a smooth rock shaped by nature and devoid of harshness. Throughout the composition there is an exquisite interplay between polished and satin finished surfaces. Both finishes are clearly defined and discrete from one another, thereby optimising the effect. Lastly, the exterior is completed with an integrated bracelet that ergonomically hugs the wearer‘s wrist, bestowing a comfortable fit. It is this assemblage of contrasting forms that has led to the Laureato’s unique profile, making it instantly recognisable when viewed from afar.

At the time of its launch in 1975, the inaugural watch was called the ‘Quartz Chronometer’. However, in Italy, the most important market for Girard-Perregaux at the time, the model soon became known among the cognoscenti as the ‘the graduate (Laureato in Italian) of the school of Girard-Perregaux’. This affectionate name served as acknowledgement of the model‘s prize-winning success and extraordinary precision. Ultimately, the name was adopted by the Maison. Coincidentally, the octagonal bezel sits atop the case, like a laurel crown sits upon the head of a laureate.

Over the years, subtle changes have been made to the design of the Laureato, but the essence of the original 1975 has always been retained. In 2017, Girard-Perregaux released the fifth generation of the Laureato, a design that has been adopted for the new Laureato 42mm Pink Gold & Onyx.

There are some iconic buildings, cars and items of furniture produced during the 1970s that will always remain timeless exemplars of accomplished design. Girard-Perreqaux believes the Laureato, an in-house design, should be considered a worthy member of this exclusive club.

Swiss know-how
Innovation has always been at the heart of Girard-Perregaux’s culture ever since it was founded in 1791. During the 1970s, the Swiss brand was at the vanguard of quartz timekeeping, a technology that promised a future of unprecedented precision. In fact, the frequency of 32,768 Hz was set by the Maison and subsequently adopted as the universal standard for quartz watches.

It was perhaps inevitable that the inaugural Laureato of 1975 was equipped with an in-house, COSC-certified quartz movement, the Calibre 705. During this period, most of the traditional Swiss watchmaking industry was in decline, ill-prepared for the shift to battery-powered timepieces.

Quartz watches remain attractive to many clients, however, Girard-Perregaux has also produced in-house mechanical movements for over 230 years, a claim few other watch brands can make. In 1995, as mechanical watchmaking began to enjoy a renaissance, Girard-Perregaux released the Laureato 8010 fitted with an in-house automatic calibre. Today, the Laureato 34mm is fitted with a quartz movement, while all models presented in larger case sizes feature mechanical movements.

A new addition to the family
Now, Girard- Perregaux is pleased to announce the arrival of a new addition to the family, the new Laureato 42mm Pink Gold and Onyx. The case is presented in 18-carat pink gold and upholds the Laureato tradition of juxtaposing polished and satin finished surfaces throughout. A matching pink gold bracelet provides a fitting means of uniting the watch with its wearer.

The Maison has paired the noble hues of the case with a sumptuous handcrafted black onyx dial. This luxurious material draws on the expertise of time-served craftspeople who shape and polish the material by hand. Creating thin dials from onyx requires no fewer than 15 different operations, however, the resultant surface looks exquisite with its mirror-like appearance. The hands, baton- style indexes and GP logo, positioned at 12 o‘clock, are presented in warm golden tones. The marriage of deep black onyx and pink gold accents delivers a becoming contrast, a characteristic linked with the Laureato name.

As a company synonymous with Haute Horlogerie, it should come as no surprise to learn that the self-winding movement within this particular reference encompasses a myriad of refined details. The main plate is adorned with circular graining, while some components feature bevelling, mirror- polishing, satin finish, snailing, sunray finish and various engravings. The bridges are decorated with straight Cotes de Geneve and the pink gold oscillating weight is embellished with circular Cotes de Geneve. Lastly, the movement has a power reserve of at least 54 hours.

Numerous operations are required to complete the Laureato’s in-house movement, including the notably refined and time-consuming finishing. Furthermore, the painstaking craftsmanship also extends to the pink gold case and bracelet. Each step of the manufacturing process is entrusted to highly skilled watchmakers. Dedication, precision and consistency are key to achieving the no-compromise standards synonymous with the Laureato name. Numerous hours are spent on each watch, however, excellence is seldom achieved in haste. While this model is not a ’limited edition‘, it remains limited by virtue of its protracted creation.

The Laureato 42mm Pink Gold and Onyx will go on sale in September and will be available worldwide in all authorised Girard-Perregaux retailers.