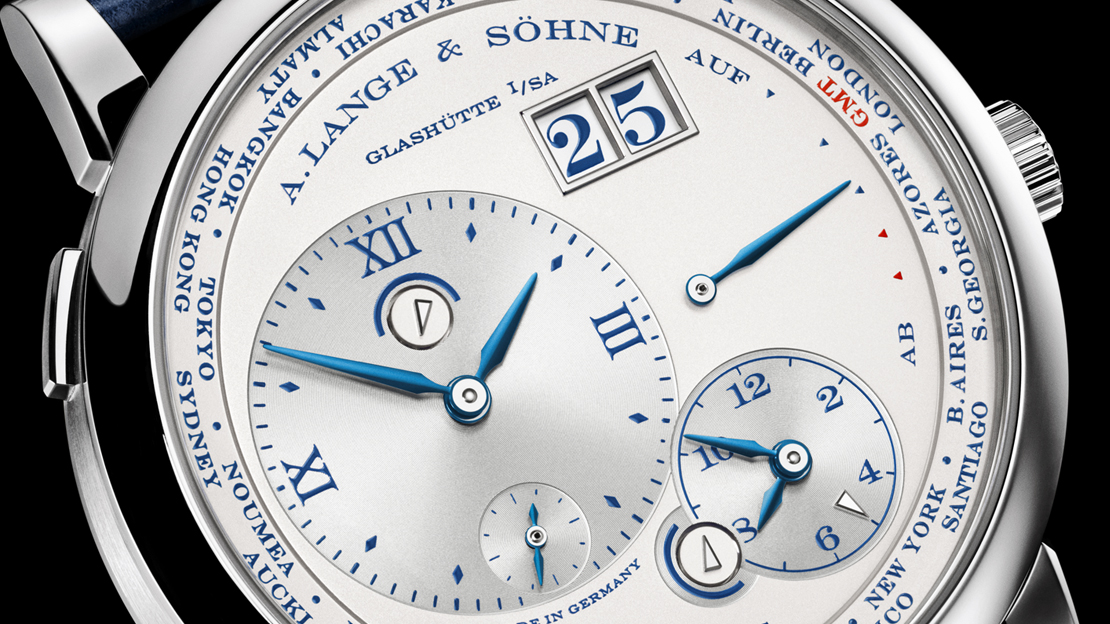 OCTOBER 24, 1994 saw A. Lange & Söhne’s rebirth at the Dresden Castle in Saxony, Germany. The storied brand at its relaunch brought out four new models. Among these was the Lange 1, which soon turned into the brand’s definitive piece.

To honor this model’s status, A. Lange & Sohne this year is presenting a new, “25th Anniversary” Lange 1 model every month, lasting until October. Four have been released in as many months since the start of the year: the Lange 1, Grand Lange 1 Moonphase, Little Lange 1 and Lange 1 Tourbillon Perpetual Calendar. The first model launched came in 250 examples. All three others were limited to only 25 pieces.

In late May, the watchmaker unveiled the fifth piece in this very special run. It’s the Lange 1 Time Zone “25th Anniversary,” which is also capped at 25 pieces.

As its name suggests the Lange 1 Time Zone keeps track of two time zones even as it retains the asymmetrical dials and outsized digital date window by which the Lange 1 has been identified from Day One. Well, actually, the Lange 1 always having two subdials means this feature lends itself excellently to a world-time function. Simply, the larger subdial displays the time at home, the smaller one the time in a second zone, or the local time.

True to world-time watches, each of the 24 time zones slicing the planet is represented by a city, with the list printed on a ring surrounding the watch’s dial. An arrow set at 5 o’clock on the smaller subdial points to the city identifying the second time zone picked to be tracked. Pressing a corrector on the side of the case, at 8 o’clock, rotates the list of cities eastward. Every switching cycle advances the hour hand of the smaller subdial by one hour. Easy.

But that’s not all. A mechanism makes it possible to swap the home time and local time readouts. This trait, A. Lange & Sohne says, is quite useful during prolonged stays abroad.

Also, both subdials are each given a day/night indicator in the form of small subdials with half-circle markings identifying which are daytime and which are nighttime hours.

A 41.9-millimeter-wide white-gold case surrounds a silver dial with blued hands and blue inscriptions, including the big date readout. Rounding out the package is a blue alligator leather strap with a white-gold prong buckle.

Underneath the surface resides A. Lange & Sohne’s in-house, handwound cal. L031.1 whose wheel train operating the time zone module is visible through the sapphire crystal caseback window. This 54-jewel movement, which packs two mainspring barrels for a 72-hour power reserve, oscillates at a 21,600vph rate.

Also displayed on the caseback window are the cal. L031.1’s intricate decorations, counting in its three-quarter plate, four screwed gold chatons, a screw balance with whiplash precision index adjuster, and the hand-engraved intermediate wheel and balance cocks. Further adorning the balance cock is the blue engraving of “25,” the font of which mimics the brand-signature outsized date display. This design element is shared in the planned 10-model “25th Anniversary” collection.

Incidentally, the “25” does not only reference the company’s anniversary, but also recall the date readout set on all A. Lange & Sohne watches presented during the brand’s re-launch on October 24, 1994. The reason behind this is that company executives wanted the watches to reflect the present date when news photos about the launch get published in the next day’s papers.