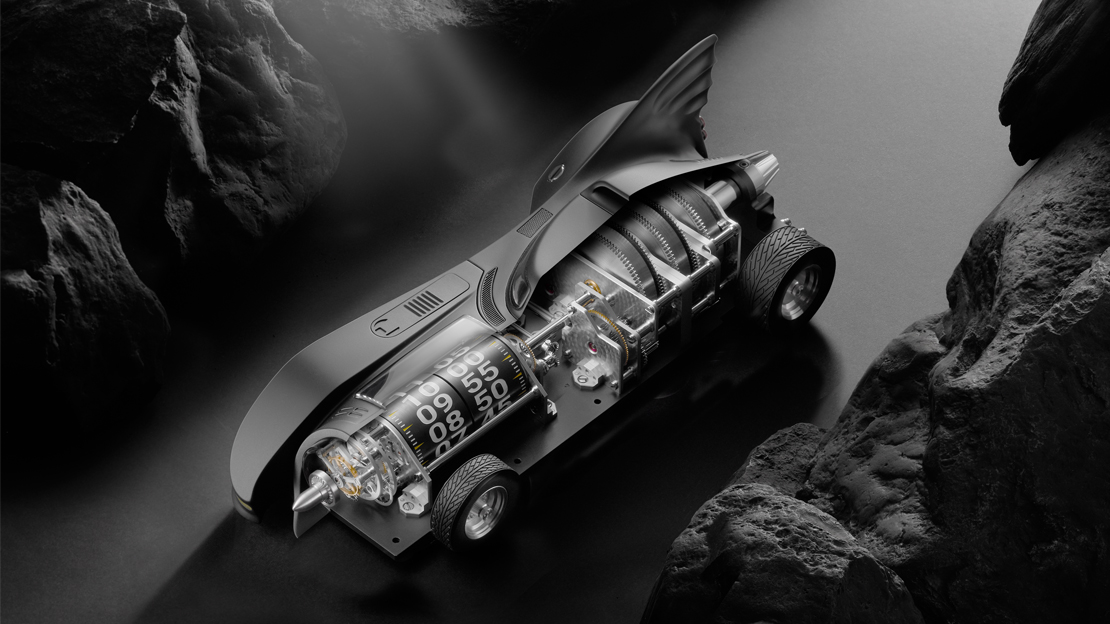 Ben Affleck, Christian Bale, and George Clooney are the last three Hollywood actors to portray the role of Bruce Wayne/Batman. And the public clamours as to who will be the next Caped Crusader. We know, now, that Robert Pattinson of the Twilight series will don the cowl in the next instalment of the movie.

But in every film released thus far, there is one integral “cast” that has never been acknowledged in the roster of players. One that appears in every movie, one that everybody can’t wait to lay their eyes on, and one whose entrance everyone anticipates: the Batmobile. We can all thank Tim Burton’s 1989 Batman movie for this unsung hero, because after its first appearance, movie-goers eagerly anticipate what the next Batmobile will look like.

Kross Studio is a manufacturer and design studio based in Switzerland. Their ambition is to turn ordinary objects into extraordinary ones. Kross Studio teamed up with Warner Bros. Consumer Products to create the collectible 1989 Batmobile X Kross Studio Desk Clock. This sleek desk clock pays tribute to the most iconic car in the realm of comics.

Every detail of this clock has been meticulously engineered from the inside out. The greatest challenge was to conceive, develop, and integrate a state-of-the-art, tailor-made clock movement to fit into the car without altering its shape. Months of research and development was put into this project. Once the design was viable, only the finest materials were used, each carefully selected for their technical properties and refinement. Only a few minor deviations were employed, but only to enhance the viewer’s experience. For example, the windows were treated with a slightly lighter tint to enable a subtle glimpse of the movement through the car’s window.

Kross Studio equipped the Batmobile with its own powerful engine: a mechanical manual winding movement crafted in-house, a feat that underlines the expertise of the Kross Studio founders. The movement has three barrels to achieve an exceptional power reserve of 30 days. It runs at a frequency of 21,600 beats per hour (3 Hz), granting the movement with even more precision. Common mechanical clock movements only operate at 2.5 Hz. Accompanying the car is a key to wind the clock and set the time with the handle in the shape of the 1989 bat logo. The vertical regulator can be seen through the turbine at the front of the car.

This exclusive 1989 Batmobile X Kross Studio Desk Clock is produced in a limited edition of 100 numbered pieces and is available now and shipping in time for the holidays at www.kross-studio.ch.