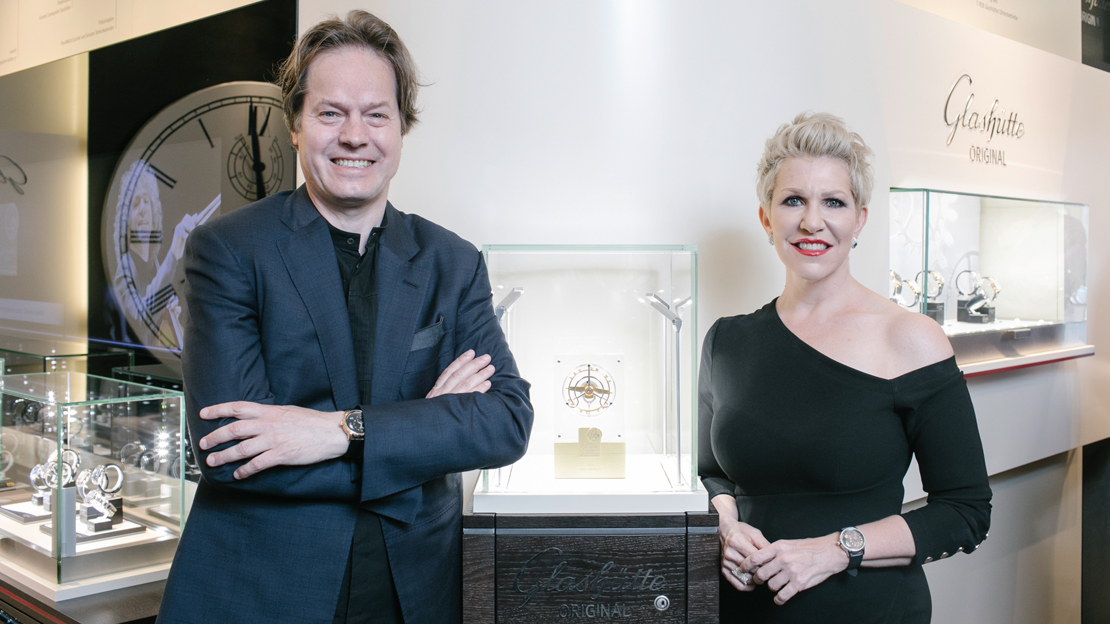 American opera singer Joyce DiDonato has been awarded the 15th Glashütte Original Music Festival Award. Glashütte Original Managing Director Frank Kittel took the occasion of the renowned mezzo-soprano’s Monday evening concert, “In War & Peace – Harmony Through Music”, at the Dresden Kulturpalast to present her with the prize. Joyce DiDonato was honoured for her exceptional commitment to music education, and graciously accepted the 25,000 Euro award together with a trophy made by two apprentice watchmakers.

Joyce DiDonato, the internationally acclaimed mezzo-soprano and ambassador for peace and humanity, has been honoured with the 15th Glashütte Original Music Festival Award. She accepted the 25,000 Euro award Monday evening at her concert in the Dresden Kulturpalast, presented by Glashütte Original Managing Director Frank Kittel and Festival Director Jan Vogler. German moderator Annabelle Mandeng presided over the ceremony in the presence of 1,800 guests.

The Saxon manufactory and the Dresden Music Festival honoured the American singer for her exceptional social commitment. For many years now, Joyce DiDonato has been actively involved in international projects based on the impact of music, and her response to the honour underscores her commitment:

“I wish to thank Glashütte Original for this great honour, and I know that I stand in a long line of previous winners who have all demonstrated a commitment not just to their art but to bringing the power and magic of the arts to as many people as possible. Art changes lives. It really is as simple as that. I am continually inspired by the saying ‘the opposite of war isn’t peace, it’s creativity.’ It is, therefore, fitting that I’m dedicating my prize money to bringing In War & Peace to El Sistema Greece, an organisation I’m honoured to be patron of. By working with refugee children across Greece, they are transforming their lives and allowing them to grow and be inspired.”

Joyce DiDonato gave a brilliant performance, with the Italian Baroque ensemble Il Pomo d’Oro, thrilling the 1,800 guests in the Kulturpalast with her programme “In War & Peace – Harmony Through Music”, which brings together 17th and 18th century works by Georg Friedrich Händel, Niccolò Jommelli, Leonardo Leo, Claudio Monteverdi and Henry Purcell.

Glashütte Original Music Festival Award in its 15th year
With Joyce DiDonato the Dresden Music Festival and Glashütte Original have now joined forces for the 15th time to pay tribute to extraordinary figures in the world of music who have made exceptional contributions to the teaching of classical music. As every year, two students at the manufactory’s own “Alfred Helwig” School of Watchmaking built the award trophy, whose form combines traditional craftsmanship with modern materials. Its cantilevered “flying” tourbillon symbolizes the virtuosity of watchmakers and represents the highest levels of the watchmaker’s art.

Among Joyce DiDonato’s predecessors as recipients of the Glashütte Original Music Festival Award are Sir Simon Rattle and the Berlin Philharmonic Orchestra, fado singer Mariza, conductor Andris Nelsons and cellist Steven Isserlis. Since 2004 Glashütte Original has been a supporting partner of the Dresden Music Festival, presented this year under the motto “Mirrors”. Extraordinary artists will continue to perform in a range of diverse venues during this 41st edition of the renowned festival, which ends June 10, 2018.

Panerai Makes its Debut as Official Timekeeper of the PRADA Cup