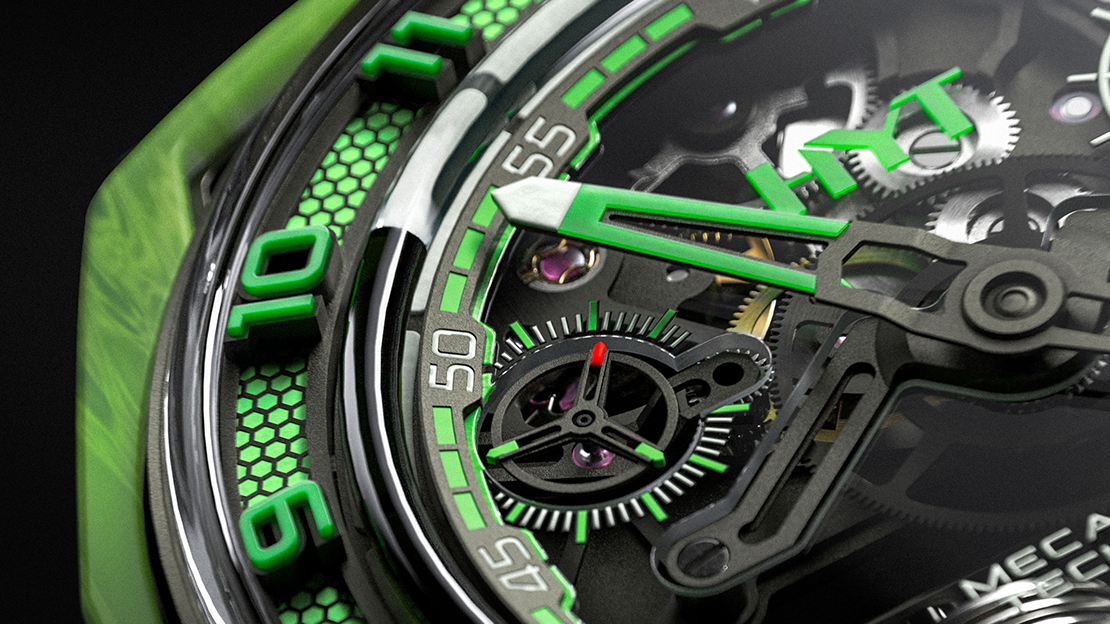 After the “Green Nebula”, HYT is presenting a new interpretation of its favourite colour: “Green Laser”.

For the launch of the new watchmaking craft, the Hastroid, HYT has developed special colour ranges with new shades, in particular an iconic green for the contemporary watchmaking brand.

Bold, bright, provocative, the Hastroid Green Laser is presented in a composite green casing, highlighting the green tone of the time graduations or the central minute hand. A powerful shade, that immediately evokes the colour of laser beams. Offering an attractive contrast effect, and allowing optimal readability, the fluid showing the retrograde indicator of the passage of hours is black. This fluid, in its extra-fine capillary, is the remarkable unique feature of the mecafluidic timepieces designed by HYT.

“We are engaged in a process of brilliant craftsmanship that flawlessly integrates fluidic technology and mechanical complexities”, states Davide Cerrato, the new CEO and Creative Director of HYT.

Drawing its strength from the greatest traditions of watchmaking knowledge, the new HYT Hastroid Green Laser combines the ambitions of luxury watchmaking of tomorrow. An art as traditional as it is ground-breaking, from the earliest time, instruments for measuring time have been the product of human genius, supported by science and formal creativity and design. The fluidic time indicator is inspired by the clepsydra, a primitive type of clock from Ancient Egypt, whose innovative principle was to allow water to flow from one jar to another to measure the passage and “flow” of time.

HYT Hastroid: a new watch tailored for the future
A new iconic craft in the HYT fleet, the Hastroid has been conceived and designed to meet new expectations. It has a 48 mm diameter casing, with a total length of 58.3 mm and a 13.3 mm case thickness. It is shaped from the most modern or contemporary high-quality materials: titanium, titanium and carbon or an original composite and titanium alloy.

Custom-made for new adventures, the multi-layer middle case presents subtle openwork, while the sandwiched construction method of the watch overall, waterproof up to 50 metres, with a central protective titanium case for movement, allows optimal handling of the missions assigned to this new spacecraft.

Like a flight deck, the watch is topped by domed sapphire crystal offering a largely unobstructed view of the overall dial. The centrepiece of the mecafluidic mechanism remains, of course, the fluidic system, with two central “bellow” reservoirs, whose design, unique to HYT creations, reinforces the character and feeling of power and the capillary surrounding the dial.

Retrograde hours and large minute hand
The coloured fluid it contains performs the function of indicating the retrograde hours. The components of the manual winding mechanical movement reveal themselves subtly through openwork workmanship at the back of the dial or plate.

This calibre was designed by Eric Coudray, a well-known master in the field. Under the guidance of the Tec Group, and with the assistance of Paul Clementi, Prix Gaïa winner, the movement has developed a finer aesthetic and finish, with elegant satin finish or laser-treated or bead-blasted parts.

Detailed work went into improving the readability of the dial and thus it has a large central pointed hand for the immediate reading of the minutes, whereas the two subdials, arranged as instruments on a dashboard, provide essential additional information: on the one hand, a small second movement, and on the other, the power reserve.

This same concern for clarity and readability led to special work on the luminescence to make the Hastroid bright even in the deepest darkest depths of outer space. Such technical elements simply reinforce the allure of this pioneering watch. Rare and original, only 27 copies of the new Hastroid Green Laser will be produced.

HYT, the UFO of luxury watchmaking
Returning to the very sources of the concept of the clepsydra and the passage of time, HYT’s designers wanted to apply a contemporary vision to it. It took more than ten years to develop fully the patented mecafluidic technology owned by the Neuchâtel brand, established in 2012.

Sometimes described as the UFO watchmaker, HYT watches, with their style and enhancements, have brought a breath of fresh air to luxury watchmaking. First spacecraft of the new HYT fleet, the Hastroid heralds a new era and explores broader horizons, without limitations or boundaries and, as always, with this same pioneering spirit driving it. No technical or stylistic limitations hold it back: the Hastroid is a watch for the future.

Davide Cerrato, a visionary designer takes the controls
Often introduced as a “master of neo-vintage watchmaking”, Davide Cerrato has produced numerous outstanding creations for well-known first-class watchmaking companies. However, Davide Cerrato is anything but nostalgic, and he who is known as the “master of vintage” among the watchmaking elite has decided to demonstrate that he can also be a designer with his eye on the future.

By joining HYT to guide not only style but also strategy, through his double role as CEO and creative director, at the company recently acquired by KTS (Kairos Technology Switzerland SA), Davide Cerrato is particularly excited to be able to express his creative inspirations freely. They draw their power from multiple transgenerational references, taking in the most daring or fun aspects of pop culture, such as the epic of space exploration or modern symbols of science fiction.

At a time when the dream of discovering the universe is once again finding its magic and strength, at the very time in which the desire to travel to space is becoming a tangible and concrete reality, the HYT Hastroid is an ode to the dream of interstellar travel.

Today, HYT is ready for take-off and preparing to go into hyperspace mode. Are you in?