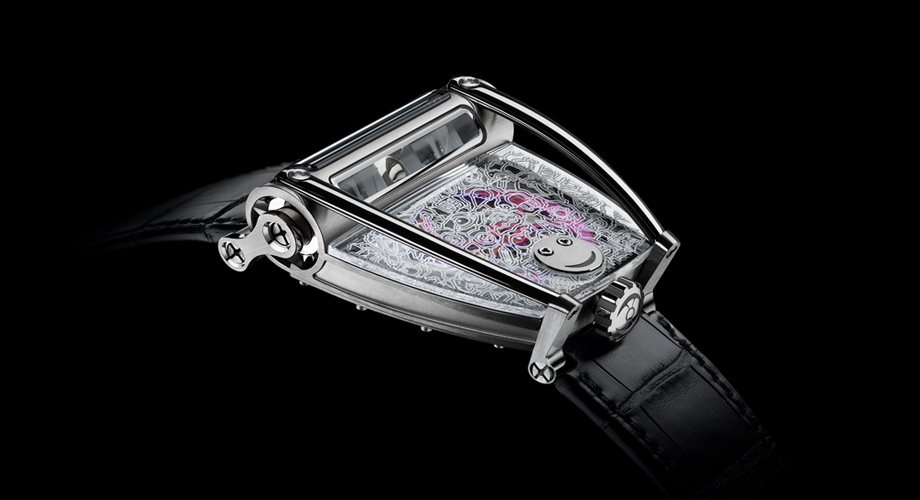 The biennial Only Watch auction, widely recognised as the world’s most high-profile charity watch event, returns in 2017. For the fourth time, MB&F is contributing a unique edition of one of their Machines to Only Watch, to be sold in aid of Duchenne muscular dystrophy, a genetic disorder characterised by progressive muscle degeneration primarily affecting young boys.

The base of this pièce unique is Horological Machine N°8, an automotive-inspired creation that takes design cues from the legendary high-octane Can-Am race. Engraved and metallised on the sapphire crystal pane that surmounts the HM8 engine is a whimsical drawing created by 15-year-old Cassandra Legendre. A student currently living in Madrid, Legendre’s primary method of artistic expression is ballet, but she also produces remarkable drawings in her spare time. As an exception for MB&F’s contribution to Only Watch, Legendre and her family agreed to this one-off participation to strengthen the message of HM8 Only Watch — a child creating something to help children who have been denied many of the dreams and opportunities of childhood.

Both intricate and simple, an approach that perfectly matches MB&F’s sophisticated yet direct approach to watchmaking, the illustration captures childhood objects of joy in a continuously drawn frame. Despite being in her mid-teens, Legendre possesses the rare touch of communicating the perspectives of someone much younger, perspectives that still retain much of the innocence and whimsy that we lose as we grow up. Look closely at the drawing and you can spot a robot, a jet plane, a toy car and a jellyfish, visual touchstones that originate in the life and creations of MB&F founder Maximilian Büsser, and resonate with children everywhere. There are also elements of pure childlike delight, such as the ice-cream cone, football, sunglasses and video game controller.

These are items that evoke histories both personal and universal, which every MB&F creation taps into with its design and message. The motif of unity and connectedness is further brought out in the journey of Cassandra Legendre’s art from initial sketch to its final form on HM8 Only Watch. According to Legendre, the drawing started out as something to keep her occupied during a dull mathematics lesson — a familiar youthful experience for many of us! — and was later discovered through social media by Maximilian Büsser after her parents encouraged her to upload her art to Facebook.

One of the elements in Legendre’s drawing is given particular prominence in the HM8 Only Watch. The elephant, situated under the racing-inspired roll bar closest to the minutes disc, is reproduced in three dimensions between the optical prisms. Positioned on a tiny white-gold plinth, the micro-sculpture hand-crafted by Oliver Kuhn is a striking allusion to the majestic beast that occupies large swathes of children’s literature from Kipling to Disney. For those suffering from Duchenne muscular dystrophy, or indeed any serious health condition, the elephant’s status as an endangered animal under siege and facing an uncertain future holds particular significance and relevance. The elephant is made of white gold and took 120 hours to complete, with its trunk tucked in and ears pulled back in a peaceful pose. Particular care and attention was paid to details such as the tusks, which measure 0.2mm in diameter at their finest point, and the eyes, measuring 0.18mm in diameter.

Where previously there was a double-screwed plate engraved with the MB&F logo, the HM8 Only Watch has a white-gold disc depicting a happy face, or smiley, with the two screws now forming its eyes. It is the ultimate symbol of the childlike perspective that Legendre brings to Horological Machine N°8 Only Watch, which is also found in all those who feel aligned with the creative drive of MB&F.