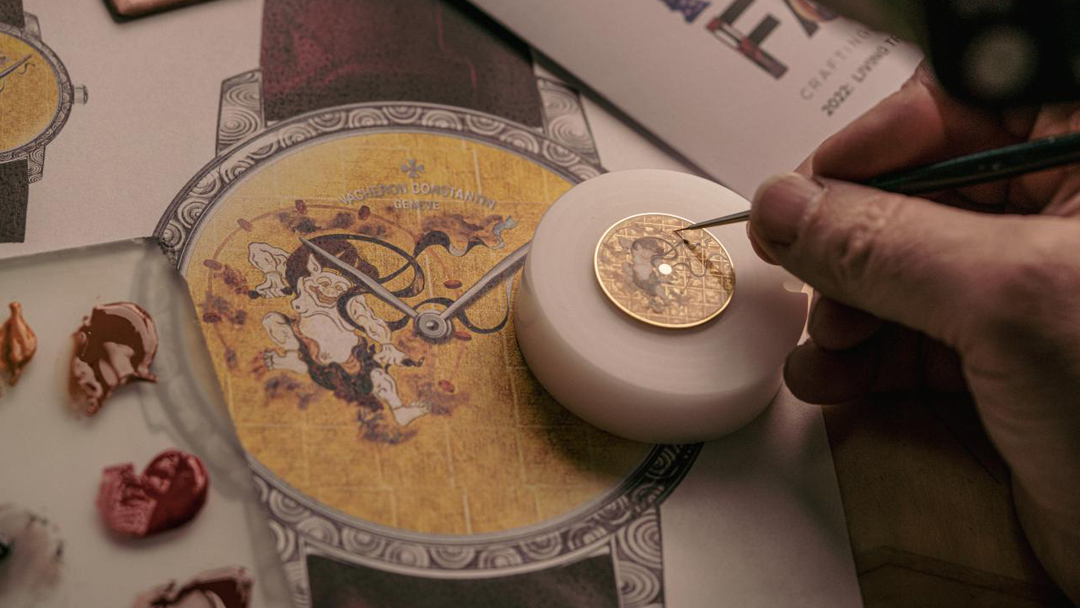 Vacheron Constantin is participating in the 2022 edition of Homo Faber, an international exhibition celebrating artisanal talents in a wide range of disciplines. The Maison is present with its master artisans – a watchmaker, a gemsetter, an enameller and an engraver – throughout the event, taking place in Venice from 10 April through 1 May and two Les Cabinotiers watches inspired by the mythology of Japan, guest of honour at Homo Faber 2022, issued in single-piece editions, on show. These ultra-thin minute repeater watches are masterpieces of enamelling and engraving, paying tribute to the close ties between the Japanese archipelago and Vacheron Constantin for over a century. On this occasion, the Louvre Museum – a repository of artistic crafts that Vacheron Constantin has been partnering since 2019 – is presenting an engraved quadriptych, gilded with gold leaf and enhanced with colours, created by the artisans of the framing-gilding workshop. The dial motifs of Vacheron Constantin watches were a source of inspiration for the gilders.

Homo Faber is taking up residence in Venice at the Cini Foundation on the island of San Giorgio Maggiore from 10 April to 1 May 2022. For its second edition, this event offers a cultural experience in the form of a complete immersion in the world of artistic crafts, divided into 15 exhibition spaces. As the Michelangelo Foundation which is curating this exceptional event explains: “Homo Faber is an expression first coined during the Renaissance and it celebrates the infinite creativity of human beings. This exhibition will provide a panoramic view of fine craftsmanship, with the sole guiding principle being what humankind can do better than machines.”

Sensitive to perpetuating and passing on artistic crafts, Vacheron Constantin is participating in the exhibition, alongside guest of honour Japan which is presenting the work of 12 “living national treasures” as the country’s exceptional artisans are known. The Maison has taken its place alongside perfumers, watchmakers, jewellers, kimono makers and bootmakers in the pavilion dedicated to the world of luxury, under the title “Details: Genealogies of Ornament.” The Vacheron Constantin booth invites visitors to discover the work of its artisans and those from the Louvre Museum’s framing-gilding workshop. During the event, the latter are taking turns in showcasing the full extent of their artistic crafts, an integral part of the heritage of both the Louvre Museum and Vacheron Constantin, which share the same vocation of transmitting and preserving artisanal skills and expertise.

In reference to the welcome given to Japan and the close ties binding Vacheron Constantin with this country, the Maison drew inspiration from Japanese mythology in creating the two Les Cabinotiers Thunder God and Wind God timepieces presented at Homo Faber.

Following the opening of trade between Japan and the West in the second half of the 19th century, the Japanese showed a clear desire to discover the cultural curiosities of Japan. Vacheron Constantin thus became a must-see attraction for enlightened lovers of timepieces from the Archipelago. Among them were aristocrats, diplomats, members of the nobility and even royals such as Prince Akihito who visited the boutique and the workshops of the Manufacture in 1953. In parallel, the Maison has never ceased to create special editions for the Japanese market imbued with finesse and elegance as well as technical features, such as those developed in 2004 for the opening of the first Vacheron Constantin boutique in Japan, located in Ginza, Tokyo. Vacheron Constantin also honoured Japanese craftsmanship with the Métiers d’Art – La Symbolique des Laques watch series, interpreted across a three-year period starting in 2010 and celebrating “maki-e,” the art of lacquer sprinkled with gold or silver powder.

Vacheron Constantin drew inspiration from works by Sōtatsu – a 17th century Japanese painter regarded as a national treasure in his home country – to create two single-edition Les Cabinotiers timepieces for Homo Faber. These are depictions in ink and colour on a gold background of Fujin the Wind God and Raijin the Thunder God, appearing on a pair of two-panel screens made at the beginning of the period and kept in the National Museum in Kyoto. One of the great figures of Japanese mythology and one of the oldest deities of Shintoism, Raijin floats in the sky, dancing with his drumsticks in his hand; while Fujin jumps rope with his windbag. These gods can be found on the dials of the two Les Cabinotiers watches, which are made by the expert hands of the Manufacture’s master enamellers and engravers, plus the gemsetter’s work of on the case. These two ultra-thin minute repeater watches are powered by Calibre 1731, a movement well known to watch lovers and collectors.

The 18K yellow gold dial is first adorned with intaglio-type fine line engraving to reproduce an irregular chequered pattern featuring matt and shiny surfaces creating the illusion of gold leaf decoration. A layer of transparent flux fired in the kiln is then applied to protect this base, which is thus ready for miniature enamel painting. Outlining the divinities is an extremely important step to ensure the application of the colours stand out clearly against the gilded background. Between six and seven firings were necessary to stabilise the colours of Fujin and Raijin on their clouds. A layer of overglazing flux, given a final polish using the lapping technique, concludes a process requiring a hundred hours of meticulous craftsmanship.

The case of both models is the object of particular care devoted to the fine line engraving of the bezel, caseband and lugs. The Raijin watch is engraved with volutes representing waves of thunder, while the minute repeater’s lug is adorned with six baguette-cut rubies symbolising the power and energy of lightning. There are also similar intaglio motifs on the case of the watch portraying Fujin in order to represent the filaments of clouds blowing the wind. The slide piece is set with six baguette-cut tsavorites symbolising the vitality of the air currents.

In-house Calibre 1731 (a reference to the year Jean-Marc Vacheron was born) powers these two musical timepieces. Its main characteristic is its extreme thinness for a minute repeater movement. At only 3.90 mm thick, it is nevertheless equipped with a barrel ensuring an impressive 65-hour power reserve. It took four years to solve the conundrum of how to create a minute repeater movement combining slenderness, pure acoustics, aesthetic elegance, reliability and robustness. Nor is the technical prowess confined to the ultra-thin challenge, since Calibre 1731 is also equipped with a completely silent flying strike governor (unlike conventional pallet lever-type governors), whose role is to regulate the rate at which the hammers strike the gongs.

Great attention was devoted to acoustics, the true reason for being of a minute repeater. To obtain a crystal-clear and perfectly harmonious sound, the gongs are not only linked to the case middle to amplify the sound, but also superimposed rather than aligned side by side. The white gold case measuring 41 mm in diameter and 8.44 mm thick enables excellent air circulation between the mechanism and the case, thus contributing to optimal propagation of the notes. The case construction is also gasket-free so that the elements can interact metal on metal and thus release enhanced sound amplitude.

The Louvre Museum alongside Vacheron Constantin

As a repository for skills and expertise that have been carefully developed over the centuries, the Louvre Museum is committed to ensuring the long-term preservation of these skills; and through its apprenticeship policy it seeks to ensure that artisans are trained to take over in due course from those who exercise these crafts. The Louvre has 13 artistic craft workshops: framers and gilders, marble workers, carpenters and cabinet makers, metalworkers, drawing fitters, painter-decorators, upholsterers, installers and fitters of works of art and documents, lighting technicians, transporters of works of art, locksmiths, museum support and caretakers, and fitters of objets d’art.

These workshops ensure the conservation of this intangible heritage. As custodians of history and innovation, the art technicians and art supervisors support all the museum’s activities: presentation of the permanent and temporary collections, expert appraisals and preventive conservation.

The framing-gilding workshop of the Louvre Museum has created a quadriptych inspired by scenes from Japanese mythology, which can be found on the two single-edition timepieces from the Maison.

Representing a true masterpiece, the four finely moulded oak wood panels assembled using keyed joints were especially created for the occasion. The panels were degreased to ensure that the preparations could fully adhere to the base. After 25 coats of primer and careful sanding, the designs are applied, engraved and then repaired – a technique using dedicated repair tools and endowing the engraved object with strength and volume. The four panels are then prepared for gilding using the “tempera” or water gilding technique. After a drying period, some parts are burnished by rubbing them with an agate stone giving gleam and glister to the gold, while the unburnished parts were given a matt coating with diluted glue.

It is then time to give life to the motifs by colouring them, in this case with oil paint. All the stages involved this magnificent work by the artisans from the Louvre can be admired on-site.

Single-piece edition
“Pièce unique”, “Les Cabinotiers” and “AC” Hallmark engraved on the back of the timepiece