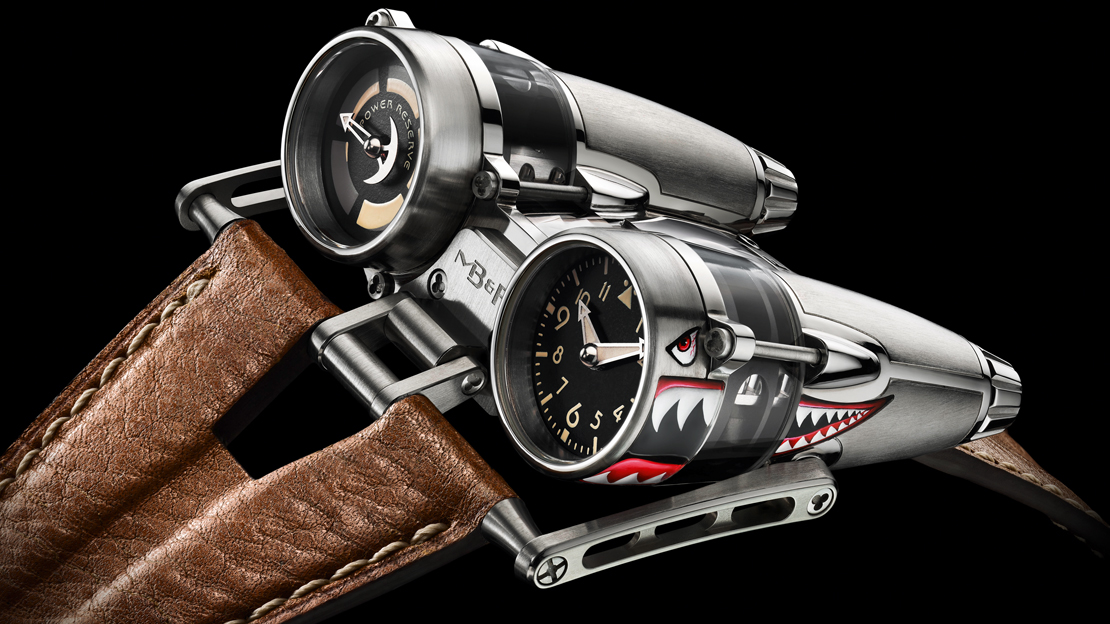 Ten years ago, the HM4 Thunderbolt was released. On that same year, the aviation-inspired timepiece was awarded Best Concept & Design Watch at the Grand Prix d’Horlogerie de Genève. This particular watch was recently listed by the New York Times as one of the ten timepieces that shaped modern watch design.

The HM4 case is unique, eye-catching, and definitely a conversation piece. Creating a movement that will go into the case is a feat in itself, for its shape calls for unconventional construction of both contemporary and classical movement designs. Because it was so complex to create, the watch was limited to only 100 pieces.

This year, on the tenth anniversary of its first release, MB&F presents a unique piece of the HM4 watch. They named this one-off wristwatch the HM4 Kittyhawk. In the world of aviation, the Curtiss P-40 was one of the most important WW2 allied aircrafts. It was produced between 1938 and 1944. Different versions were made, each version carried different nicknames, like Warhawk, Tomahawk, and of course, Kittyhawk. The Kittyhawk’s track record in combat was pretty good. And regardless of what people say, it remains as one of the most iconic aircraft of that time. Its key identifying feature is the “shark mouth” and eyes on the nose of the fuselage.

Just like the “nose art” of the legendary aircraft, the HM4 Kittyhawk bears the painted shark mouth and eyes on the sides of the watch. Microns of metal was removed from the sides of the titanium case before it was hand painted by miniature painter Isabelle Villa. When the paint was dry, a fill coat of transparent varnish was applied to protect the artwork.

The grade 5 titanium case measures 54 mm wide x 52 mm long x 24 mm high. It carries the 3D horological engine developed by MB&F that is composed of 311 components. Its two mainspring barrels allow for a 72 hour power reserve. It beats at 21,600 vibrations per hour. The left turbine indicates the power reserve while the right displays the hours and minutes. It comes with a vintage leather strap with a titanium deployment buckle.