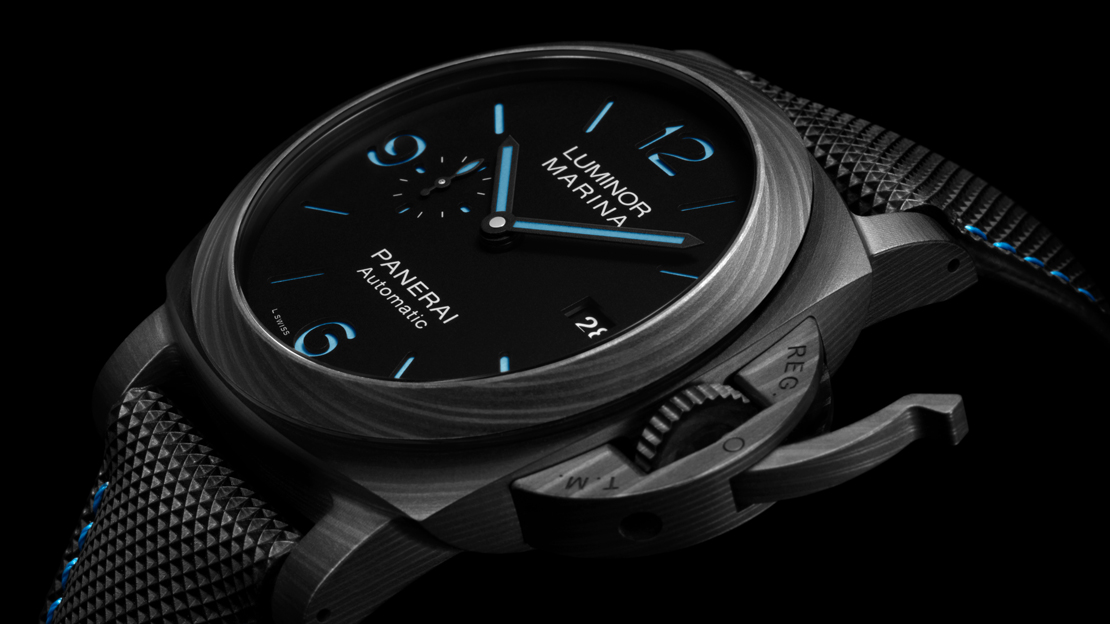 Back when wristwatch diameter was steadily increasing, top tier watchmakers were concocting their own cocktails of carbon and composite-based materials to lighten the load on the end user. Officine Panerai developed a proprietary lightweight carbon fiber and called it Carbotech in 2015. This is a cutting-edge composite, formed of superimposed layers of carbon fibre which are alternately aligned, then consolidated under pressure and controlled temperature with a binding matrix, based on PEEK (polyether Ether Ketone).Highly resistant to external shocks and corrosion, it is recognizable for its aesthetic appearance, created by its irregular texture so that each piece has a unique character.

The first Carbotech Submersibles were 47mm followed by a 42mm version a year or two later. Capitalizing on this year’s relaunch of the Panerai Luminor Marina collection, the brand is debuting a new, cutting edge interpretation of the lightweight watch (tipping the micro scales at 96 grams) with the 44mm-Luminor Marina Carbotech (PAM01661).

Borne out of the brand’s insatiable search to constantly evolve its products, the 44mm combines several of the characteristics that sets a Panerai apart from its rivals. The PAM01661 marks the first time a Carbotech case is combined with a Sandwich dial with blue Super-Luminova markings (all three are trademarked by Panerai) making for a decisive aesthetic revolution to herald the new decade.

Water resistant to 30 Bar (approximately 300 meters), the Carbotech 44mm is home to a tried and tested movement commonly found in the Luminor family, the P.9010 calibre. Designed and produced in house, it is a tested automatic movement just 6 mm thick, fitted with the function for rapidly setting the hour hand, a process which simultaneously adjusts the date. It has a power reserve of three days provided by a double spring barrel.