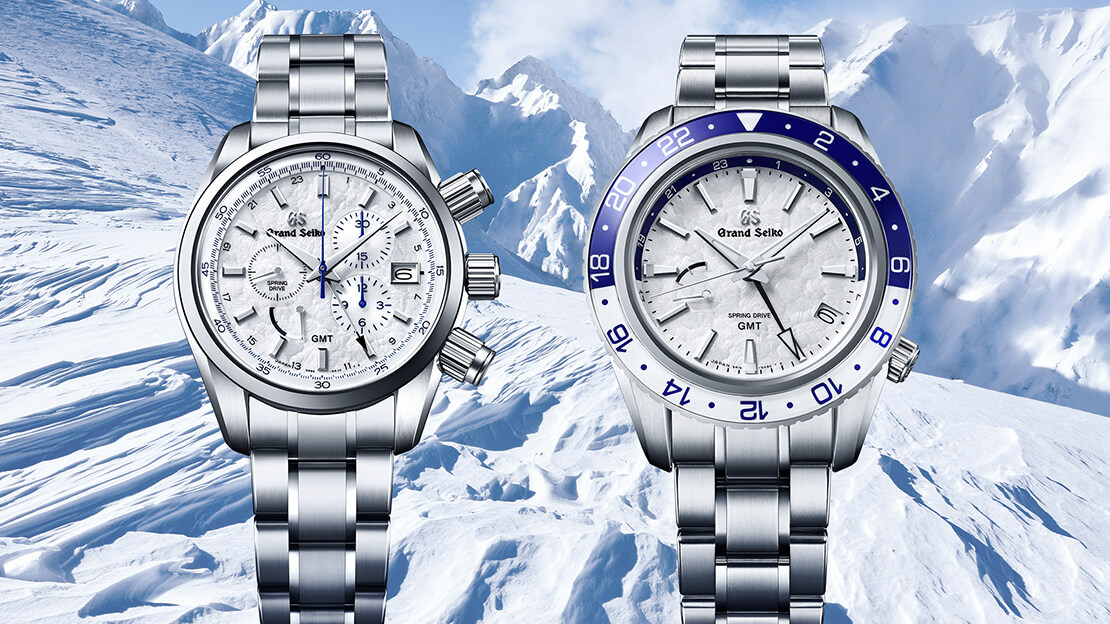 2002 saw the creation of Grand Seiko‘s first GMT watch and, five years later, the first Spring Drive Chronograph was released. Both these technical developments received immediate acclaim and, ever since, have featured in a range of Grand Seiko creations of very different styles. Today, two Spring Drive limited edition timepieces are introduced that commemorate the 20th anniversary of the first Grand Seiko GMT watch and the 15th anniversary of the first chronograph watch. Both join the Grand Seiko Sport Collection and their dials take their design inspiration from the wintery snowscapes of the mountains that surrounds the studio where they are made, in Shinshu in central Japan.

The watches are as rugged as the Hodaka mountains that the Grand Seiko watchmakers can see from the Shinshu Watch Studio. The case and bracelet of the GMT version are in stainless steel while the GMT Chronograph version is made from high-intensity titanium. The dials capture the rough texture of the snow that can be seen high in the mountains in late winter and early spring, when strong winds carve unique patterns as they whip across the snow surface. The blue accents on both dials echo the bright blue color of the winter sky in Shinshu.

Both are powered by specially adjusted Spring Drive movements which offer an enhanced accuracy rate of ±10 seconds per month. Both feature a secure see-through case back through which can be seen the 18K gold Grand Seiko lion emblem which graces the oscillating weights as an indication of the enhanced accuracy.

The Spring Drive Chronograph. Unquestionably one of the most accurate spring-powered movements in the world.

This Spring Drive Chronograph measures elapsed time up to 12 hours with an accuracy of ±0.5 seconds per day. Thanks to the regulation system that is unique to Spring Drive, its accuracy remains at this high level even when the power reserve is low. Equally importantly, it measures elapsed time not to the nearest fraction of a second but exactly, thanks to the fact that the glide motion hands stop at the very instant that the button is pressed and not just at the nearest “tick”.

Thanks to Grand Seiko’s unique Spring Drive technology, the seconds hand glides silently and smoothly, with no “tick”, across the dial, perfectly reflecting the natural and continuous flow of time. The power reserve is 72 hours when fully wound and is shown on the discreet indicator next to the eight o’clock marker. The GMT hand allows a second time zone to be shown and a third can also be displayed using the 24-hour bezel. The hour can be adjusted without compromising the accuracy.