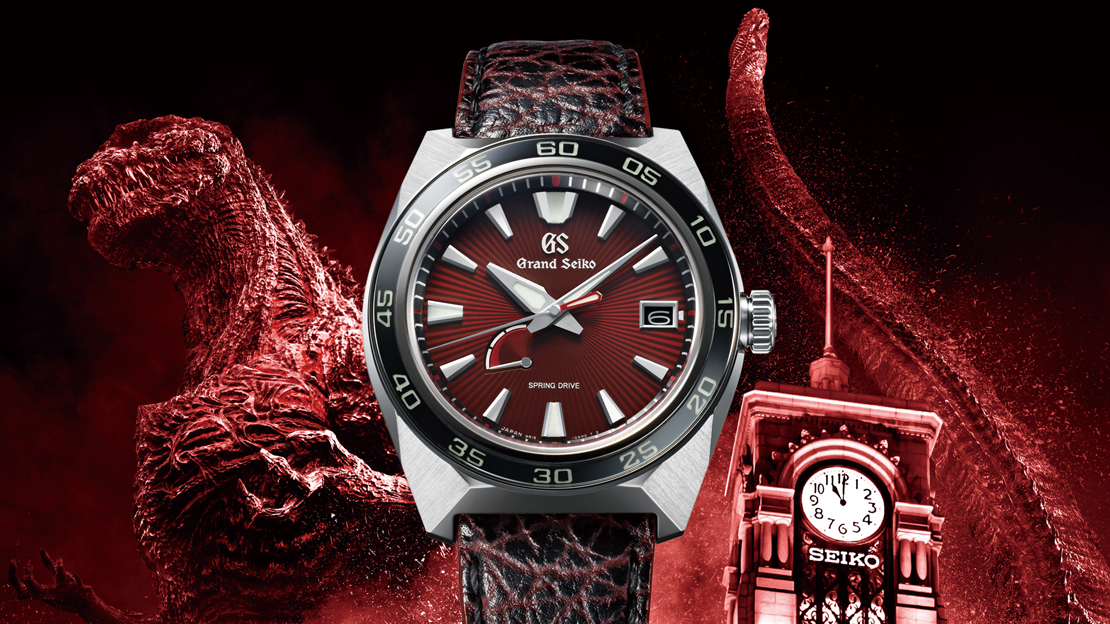 IT’S the 20th anniversary of Seiko’s seminal Spring Drive, the 65th of Godzilla — though it’s clear the monster isn’t about to retire anytime soon. Because the new Grand Seiko Spring Drive limited-edition watch dedicated to it may well signal the start of a long relationship between the two icons, not mark the end of, well, anything.

Grand Seiko explains its parent company Seiko and the mythical Godzilla actually share something in common — their birthplace, if not a spot of violence. This is because Seiko opened the doors to its Wako store, now an unmistakable landmark in Ginza, in 1952. A couple of years later, the original Godzilla starrer by Ishiro Honda debuted, with the flick including a scene in which the monster knocks off the Wako store’s iconic clock tower.

But, then, time heals all wounds. The “Grand Godzilla” watch, the ref. SBGA 405 that’s limited to 650 examples and is set for release in November, is basically a reworked ref. SBGA 403 which Grand Seiko brought out earlier this year. This means the new piece is powered by the Spring Drive cal. 9R15, a self-winding, 30-jewel movement whose second hand glides, rather than tick, around the dial, and which incorporates a quartz crystal oscillator for more accurate timekeeping. The cal. 9R15 sits on the top rung of Grand Seiko’s 9R Spring Drive family, and is adjusted so it would not gain or lose more than 10 seconds in the course of a month (or accurate to within half-a-second a day).

Like the ref. SBGA 403, the Grand Godzilla wears a beefy 44.5-millimeter-wide titanium case with unusually angular and pronounced but short lugs. These elements are then matched to a relatively svelte, black bezel with five-minute markings, lending the watch a sporty vibe.

But deviating from the ref. SBGA 403’s looks, the ref. SBGA 405 gets a lush, deep red dial. Also as textured as that in the earlier watch, the Grand Godzilla’s has a sunray-like pattern that calls to mind the “heat ray beam” shooting out from the monster’s mouth. Sitting on top of this are applied steel indices that are as crisp as the Zaratsu-polished hands. All the markers and hands wear a luminescent coating. The Spring Drive’s power reserve meter still resides near 8 o’clock. Complementing the rich red dial is a strap made from shark skin in which the fissures on the rough black surface are filled with red, hinting at Godzilla’s tough hide. So, the touches are all really subtle and elegant; nothing juvenile in this watch at all.

Fact is, the sole overt reference to Godzilla can be seen on the crystal window on the caseback, on which printed is an image of the monster about to topple the Wako clock tower. As commemorative watches go, the Grand Godzilla is one handsome beast.