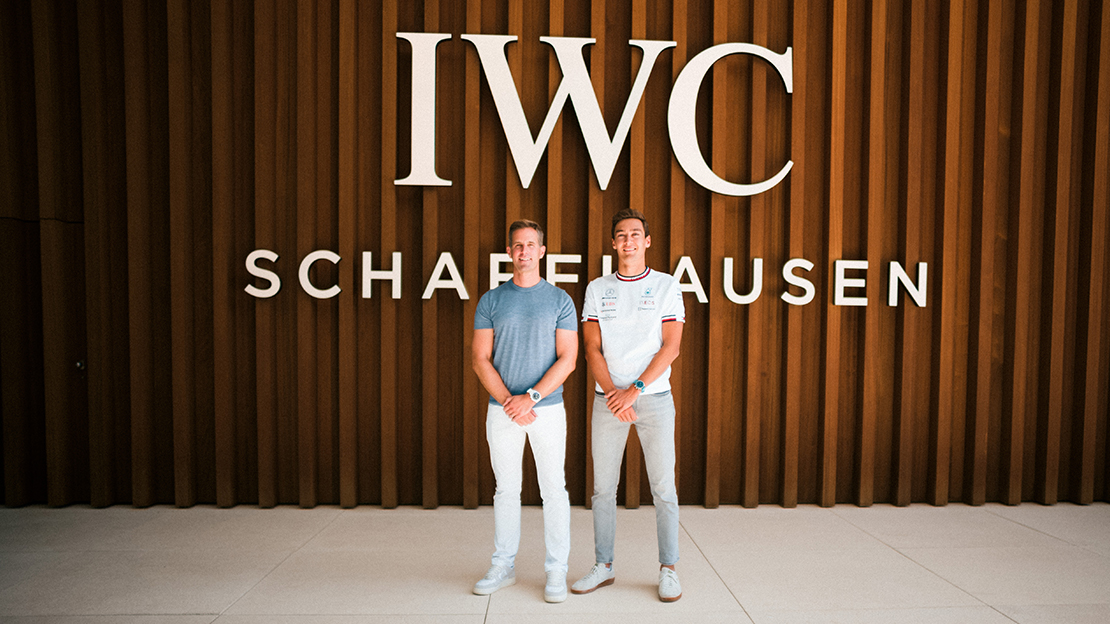 Mercedes-AMG PETRONAS Formula One™ Team driver and IWC brand ambassador George Russell visited the IWC Manufakturzentrum in Schaffhausen for the first time. IWC is the official engineering partner of the Formula One™ team, which Russell joined earlier this season.

On his first visit to the city of Schaffhausen, IWC CEO Christoph Grainger-Herr, Chief Design Officer Christian Knoop and Chief Marketing Officer Franziska Gsell welcomed George Russell to the IWC Manufakturzentrum. The new manufacturing centre was inaugurated in 2018 to mark the Swiss luxury watch manufacturer’s 150th anniversary. In this ground-breaking new facility, IWC has brought together components making, movement assembly and case making under one roof. The process from raw metal to finished watch movement and case is organised in logical and sequential steps and can be experienced up close and transparently. During the visit, Russell spoke to IWC watchmakers and engineers and experienced the watchmaking and design process first hand. He also took the opportunity to learn more about IWC’s unique heritage and sustainable production methods. During his visit, Russell was wearing the Pilot’s Watch Chronograph 41 Edition “Mercedes-AMG Petronas Formula One™ Team” (Ref. IW388108). IWC and the Mercedes-AMG PETRONAS Formula One™ Team launched the first official team watch on the occasion of the Miami Grand Prix™ earlier this year.

ABOUT GEORGE RUSSELL
Born in Kings Lynn, England in 1998, Russell began his racing career in karting in 2006. Over the next decade, he became an MSA British Cadet Champion, British Open Champion, Super One British Champion and CIK-FIA European Junior Champion, to name just a few. In 2017, he joined MercedesAMG PETRONAS Motorsport’s junior driver programme, then graduated to Formula One™ with Williams Racing in 2019. Russell earned his first points for Williams at the 2021 Hungarian Grand Prix™, before qualifying second and claiming his first Formula One™ podium finish at the race in Belgium. In 2022, he embarked on a new chapter in his career by joining his teammate at Mercedes-AMG PETRONAS Formula One™ Team, Lewis Hamilton, as a fellow IWC brand ambassador.