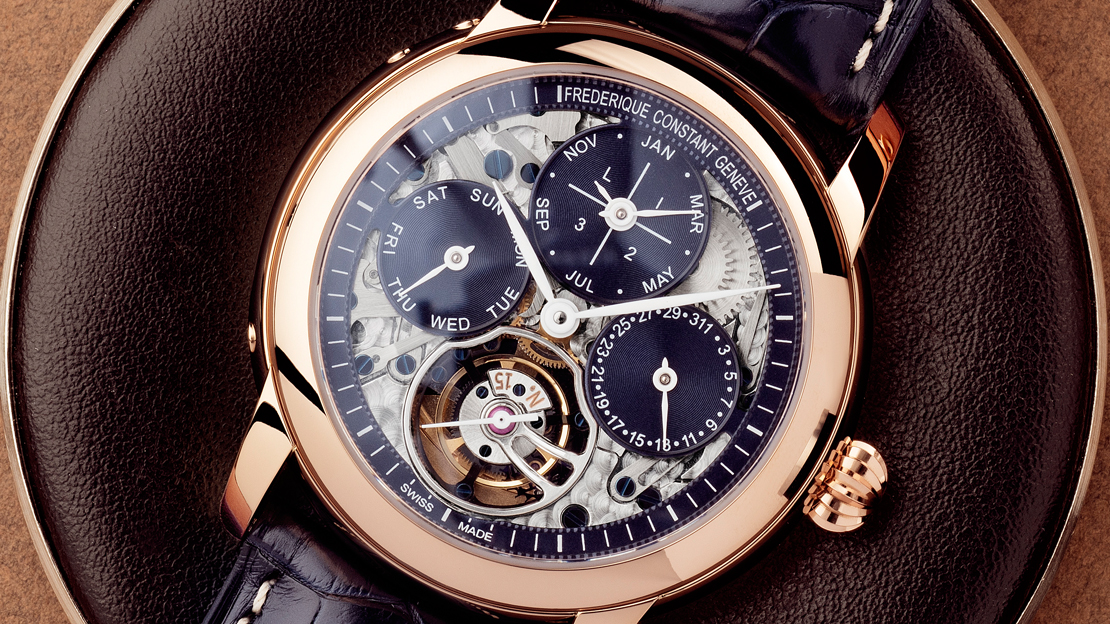 TO MARK its 30th anniversary in 2018 Frederique Constant unveiled its in-house Tourbillon Perpetual Calendar, a piece that brings together two complications it previously built on its own, and which were meant to celebrate company milestones.

The brand in 2008 — its 20th year — launched its first in-house tourbillon, which was based on the Heart Beat, in turn its first in-house movement. In 2016, just as it reached its 10th year at its manufactory in Plan-les-Ouates, Geneva, Frederique Constant introduced its in-house perpetual calendar.

Now, to celebrate the opening of its expanded manufacturing facilities in Plan-les-Ouates, the brand brings out two versions of its Tourbillon Perpetual Calendar. Both coming in 42-millimeter-wide cases, the watches are available in either steel or in 18-karat rose gold. The steel version is limited to 88 examples, the rose gold watch to only 30. It should be noted these watches are essentially the 30th anniversary commemorative pieces.

Regardless of case material, the watches are defined by a skeletonized dial; the three subdials for the day, month (and leap year indicator) and date displays hover above sections of the movement beneath them. A large aperture for the tourbillon mechanism dominates the lower part of the dial. A minute chapter ring on the periphery of the dial — hours are marked by slightly thicker indices — picks up the navy blue color of the subdials which, by the way, are decorated with circular graining. The hour and minute hands are leaf-shaped. Pointers for the calendar readouts mimic those, although less pronounced. It’s clear Frederique Constant exercised restraint with the dial furniture to allow the movement’s mechanical bits, not least of which the tourbillon, take the spotlight.

More of the movement’s components are visible through the sapphire crystal window on the caseback. And, here, the perlage and Cotes de Geneve flourishes lavished on the movement are on full display.

More of the movement’s components are visible through the sapphire crystal window on the caseback. And, here, the perlage and Cotes de Geneve flourishes lavished on the movement are on full display.

Speaking of which, the movement is the in-house cal. FC-975, an automatic ticker operating at 28,800vph and can store power for up to 38 hours. It is fitted with an escapement wheel and an anchor made from silicium, a light material that resists magnetism and temperature changes. Its tourbillon is housed in a mobile cage driven by a gear train carrying the balance wheel and its escapement. Weights were added in the tourbillon’s cage, which are then tempered by a “smart screw” system — basically, the tourbillon was constructed with an inherent imbalance, which is then corrected by the smart screw. This, according to Frederique Constant, actually results in a more stable amplitude and rate.

The tourbillon’s cage is sequentially numbered, with the inscription placed on the top plate. The number matches that which is assigned to the case.

Of course, the other feature of the cal. FC-975 is its perpetual calendar function. As expected from such complications, this one recognizes which months have 28, 30 and 31 days, and which years have 366 days — or the leap years. In theory, then, the Tourbillon Perpetual Calendar’s day, date and year displays do not require correction until March 1, 2100.

By which time it would not be surprising if Frederique Constant releases a special timepiece marking the occasion.