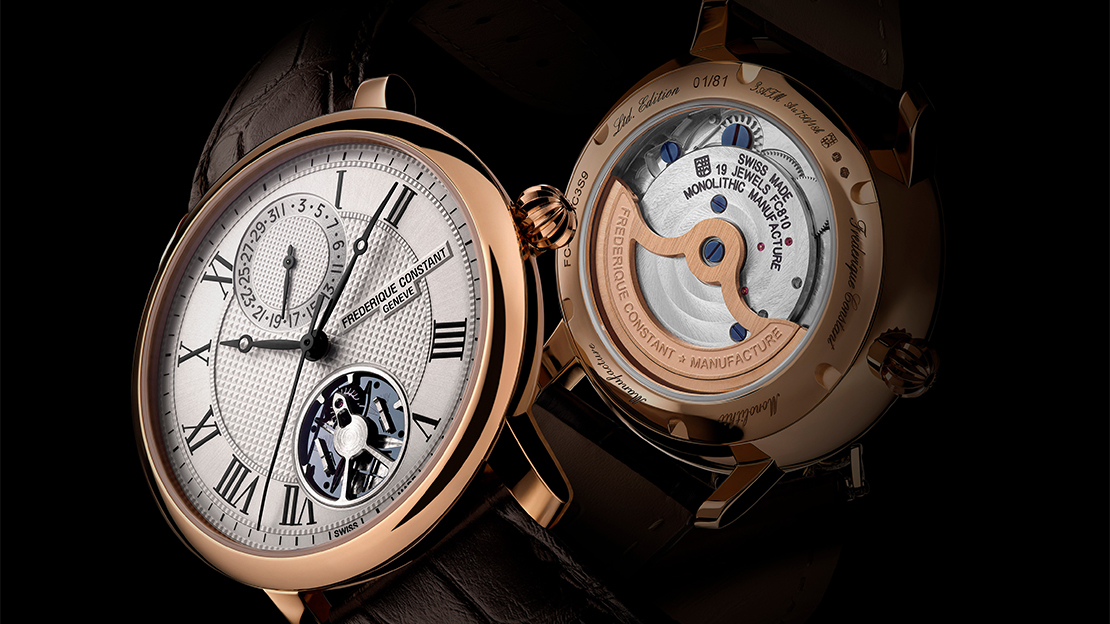 The word ‘monolithic’ typically implies something huge, massive, possibly overwhelming. It can also mean something that has been created without joints or seams, from a single piece. How interesting it is that the Frederique Constant Slimline Monolithic Manufacture meets both of those definitions.

Mechanical watches are not new to the horological world. A mechanical movement is based on a mainspring typically wound by hand. The spring slowly unwinds in a hopefully even motion, allowing the timepiece to keep time correctly. There is also an automatic mechanical movement, meaning the spring winds as you move your hand throughout your day. For those who tend to forget to wind their watches, there is a watch-winder that will keep the watches moving and thus, keep them wound; this is good for those of us who have several watches on rotation (no pun intended).

The oscillator in the mechanical movement is what has become a game-changer with the Frederique Constant Slimline Monolithic Manufacture. This flexure oscillator is massive, not in size, but in concept. (See, meeting the first definition of ‘monolithic.’) What used to need 26 components now only needs a single component. (And meeting the second definition of ‘monolithic.’) And the single component results in a movement that beats 288,000 vibrations per hour, ten times faster than traditional movements. Having less means not just achieving the same results, but better results.

This technological breakthrough can redefine mechanical watchmaking. The single component is the oscillating weight made in silicon, and can fit into a conventional movement configuration. That is not the only innovation in this watch though. The oscillator, or flywheel, has three new innovations to it: that it is a one-piece oscillator, that it is ultra-thin and has a new anchor system, and that the adjustment weights used to regulate the flexure oscillator are similar to those on a traditional free-sprung balance. All of this means a smaller size yet better accuracy. And with a power reserve of 80 hours. Not bad at all. I guess in this case, they really did reinvent the (fly) wheel.

This reinvention was a result of collaborative efforts between Frederique Constant and Flexous. Peter Stas, co-founder and former CEO of Frederique Constant, and Dr. Nima Tolou, founder and CEO of Flexous, met and discussed the possibilities that could result from their meeting of minds. They had a grand, perhaps monolithic goal: a flexure oscillator that was similar to standard size, at the highest frequency possible, with an 80 hour power reserve, and at a cost effective production point.

Throughout the process, it became clear that a traditional gear train would not be strong or sturdy enough, so a new base movement was also created, the automatic calibre FC-810. The Frederique Constant Slimline Monolithic Manufacture now bears this new movement with pride. The watch comes in a 40mm round case, with an elegant dial, printed Roman numerals, and Breguet-style hands. The beautiful new oscillator is seen at the 6 o’clock, and is balanced off visually with the pointer date at the 12 o’clock. The watch model comes in limited editions, also a nod to the new calibre: 810 pieces in stainless steel with a blue dial, 810 pieces in stainless steel with a silver colour dial, and 81 pieces in 18k pink gold.