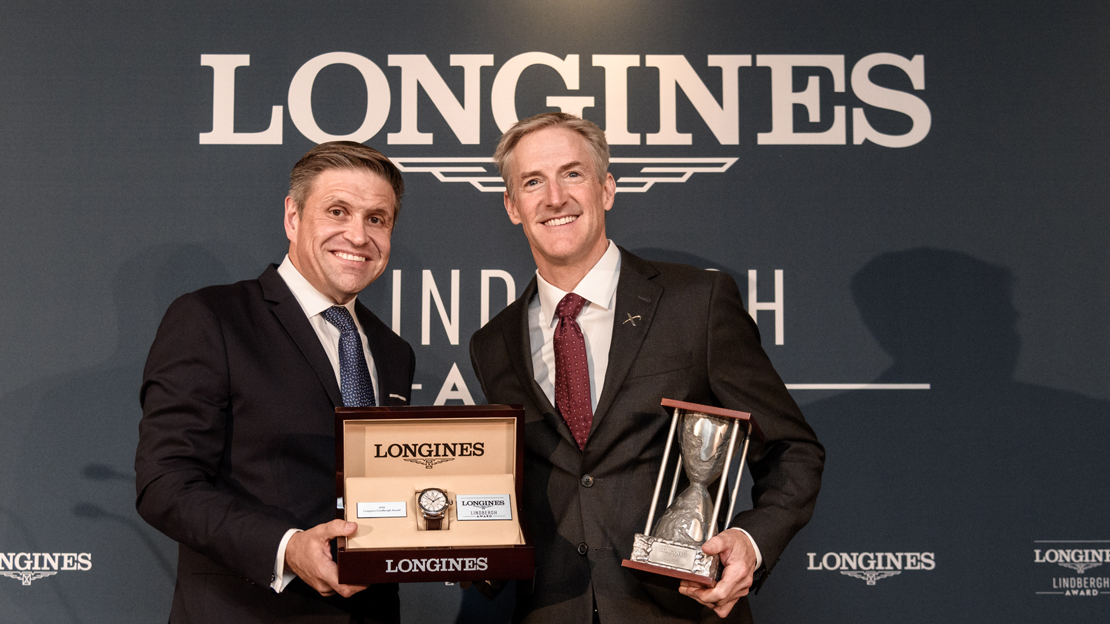 Longines was honored to present the very first Longines Lindbergh Award during a ceremony held in New York. In the spirit of elegance and performance dear to the Swiss watchmaker, the first laureate to receive the prize, was none other than Erik Lindbergh, grandson of Charles Lindbergh. In 1927, the famed aviator performed the very first solo, nonstop transatlantic flight and, to celebrate this remarkable feat, Longines created a prize to honor other innovative achievements.

In May of 2002, during the 75th anniversary of the historic flight, a 53-year-old Erik Lindbergh walked in the footsteps of his illustrious grandfather and performed the same Atlantic crossing between Long Island, New York and Le Bourget, near Paris, aboard a small single-engine airplane. An artist and designer, Erik Lindbergh has been involved in a number of “crazy projects” in the field of space tourism and ecological airplanes. His story also tells of a struggle against adversity, having overcome severe health problems.

Longines chose to grant the Longines Lindbergh Award at the headquarter of the New York Times, the newspaper that so passionately told of the exploits of Charles Lindbergh, during a special evening held Monday, May 21, on the anniversary of Charles Lindbergh’s flight. During the event, which brought together representatives from the aviation sector, members of the media and the Lindbergh family, Longines Vice President and Head of International Marketing Juan-Carlos Capelli reminded us of the brand’s historic involvement in the field of aviation.

Mr. Capelli also awarded Erik Lindbergh with the Lindbergh Hour Angle Watch, a timepiece designed by his grandfather and developed by Longines shortly after the inaugural voyage, symbolizing the brand’s support for aeronautical pioneers and its close ties to Charles Lindbergh. Following his 1927 crossing, the adventurer approached Longines to create a watch that could respond to his aviation needs. Thus, the Lindbergh Hour Angle Watch was born and became the true watchmaking icon it is today.

The Longines Lindbergh Award, which comes with $25,000 in reference to the sum received by Charles Lindbergh on behalf of Raymond Orteig for becoming the first aviator to successfully cross the Atlantic, is awarded each year to a person of Charles Lindbergh’s pioneering character, in a spirit of elegance and performance dear to the Swiss watchmaker. The award’s laureate is chosen by a jury that includes Juan-Carlos Capelli, Vice President of Longines and Head of International Marketing, Stéphanie Lachat, Doctor of History, Bernard Decré, President of the “A la recherche de l’oiseau blanc” association, and Spiros Bouas, pilot, co-founder and advisor for the “Spirit of St-Louis 2” project.