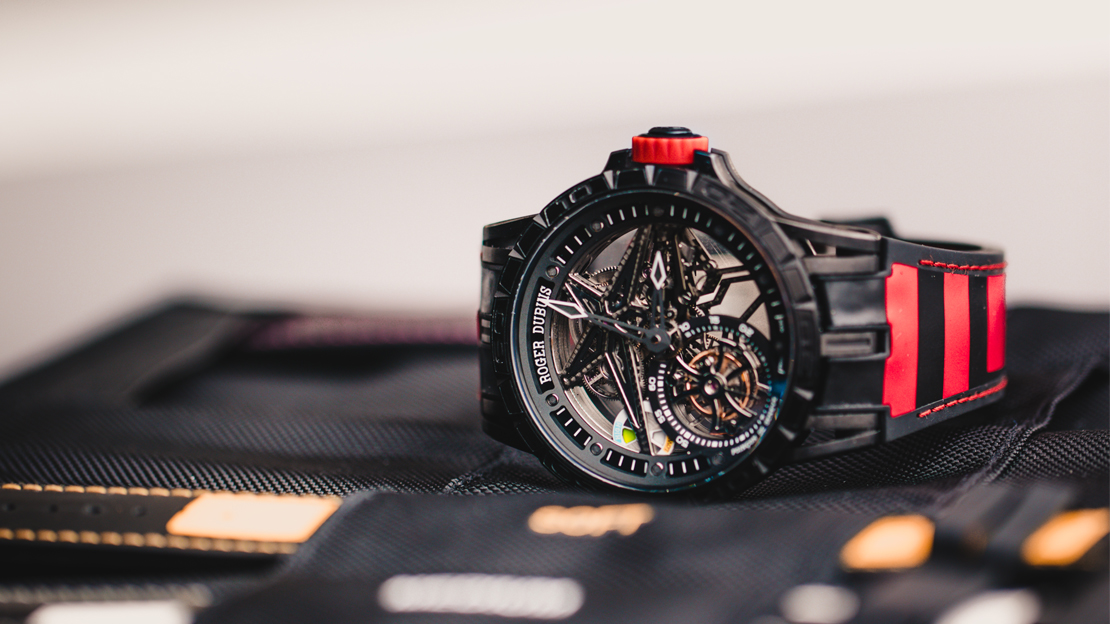 Monaco marked the spot in May as motorsport and fine watchmaking enthusiasts alike had their fire ignited by an exciting double wave of the chequered flag. The first indicated the moment when the winner of the world-class motorsport event crossed the victory line. The second was the live digital launch of the second season of Roger Dubuis X Pirelli, embodied in the brand-new Excalibur Spider Pirelli Single Flying Tourbillon. Minutes after the race finish, this super high-spec model hit the watchmaking track with a strap matching the colour of the winning car tyres. Its adrenalin-pumping range of new design options will include a complementary Pit Stop Collector Box of interchangeable straps – each echoing the high-rev partnership between the brand that dares to be different and the iconic tyre maker.

Roger Dubuis thundered onto the motorsports scene with some show-stopping timepieces in 2017, launched at equally ‘disruptive’ events. The launches of its Perfect Fit and Raging Mechanics partnerships with Pirelli and Lamborghini… These high-profile liaisons provide ideal opportunities to invite Roger Dubuis clients into the hallowed arenas of cutting-edge motorsports and to demonstrate in no uncertain terms what happens When visionary engineers meet with incredible watchmakers. In 2018, the term “flying” at Roger Dubuis refers not only to a spectacular horological complication, but also to its overall performance as it rolls out new additions to the iconic Excalibur family.

Exclusive colour coding
The latest embodiment of this relationship with racing royalty comes with the exclusively developed Roger Dubuis expression of Pirelli’s famous distinguishing colour codes in the strap which features rubber inlays from certified Pirelli winning tyres having competed in official races. Ramping up their alliance with a model featuring one of the ultimate watch complications, the gravity-defying tourbillon, Roger Dubuis and Pirelli go the extra mile on this lap with the Excalibur Spider Pirelli Single Flying Tourbillon. What’s more, this sophisticated feat of mechanical engineering comes with an ultra-select sting in the tail. The race finish provided hardcore motorsports fans and watch aficionados alike with plenty of cause for excitement as, minutes after the chequered flag was waved, the super-hot new Roger Dubuis timepiece roared off the launch grid in its exclusive new livery. Followers were stunned to see that not only does the strap colour of the new arrival match the tyres of the newly crowned winning driver’s car, and even more thrilled to learn than that the exclusive boutique version will be delivered with a PitStop Collector Box. This motorsports-inspired set contains no less than seven different straps echoing the seven Pirelli tyre colours used for competitions during the previous season. Each conveys part of the Pirelli logo positioned on the side of every high-speed motor racing tyre and is engraved with the code used by Pirelli to track its winning tyres. The very same code appears on the Certificate of Authenticity signed by both Pirelli and Roger Dubuis.

Pitstop-worthy strap changes
Adding the final ultimate customer experience touch commensurate with the Perfect Fit Partnership ethos and designed to match the famous under three second pitstop on top motor racing circuits, the Excalibur Spider Pirelli Single Flying Tourbillon features a QRS (Quick Release System) on the strap and buckle enabling changes in… less than three seconds! With a black DLC-coated titanium case, this boutique exclusive 28-piece limited edition features new trigger and bridge designs, along with a spectacular transparent view of the new RD508SQ hand-wound calibre with power reserve indicator and state-of-the-art black Astral Skeleton. Rimmed by speedometer-like second counters complete with automobile-inspired pointers, the single flying tourbillon is stationed at 7 o’clock, while the multi-coloured power-reserve indicator offers a cool nod to racing car cockpit fuel gauges. Minus the boutique edition strapbox, but with an additional strap to ring the changes, the Excalibur Spider Pirelli Single Flying Tourbillon will also be available in a version retailing in other specialised stores.

A word of warning to fans of exceptional watchmaking and speed machines alike to sit tight – as the brand that dares to be different gears up for the next world-rocking instalment in daring disruption.

There is a new Top Gun in the air. A special one. But now you don’t have to be a top fighter jock to own one.