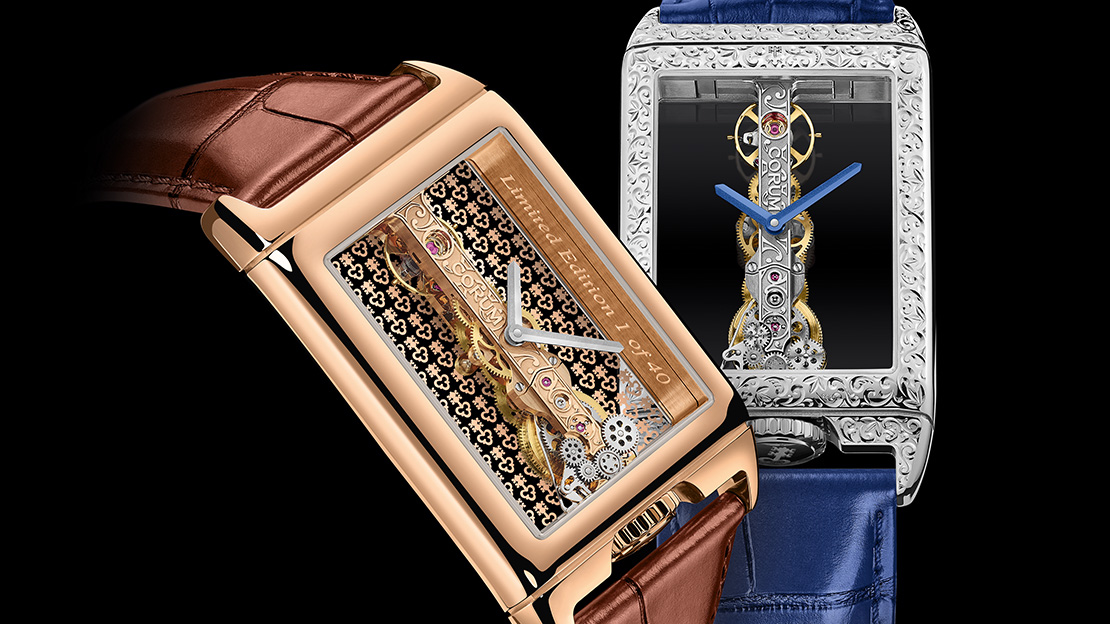 Corum was founded in 1955 and established itself as a leader for creativity in watchmaking, thanks to avant-gardist founder, René Bannwart. Being self-proclaimed “avant-garde since 1955” is something the brand takes seriously, and they really do live up to that claim. Their efforts go beyond the stereotypical pursuits as they delve into a re-envisioned timepiece. The brand looks to the classic tradition of high-quality watchmaking but they also look to more modern and popular expressions as well. They sometimes take a page from street art and work that spirit into some of their collections. Let’s take a closer look at one of their four collections, the Golden Bridge.

Building the Bridge
The Golden Bridge collection was first introduced 40 years ago, and it seems fitting to launch an anniversary homage with two Golden Bridge Rectangle watches this year. 2020 has been quite an unusual year, so why not cap it off with two beautiful timepieces to celebrate the 40th anniversary? Previous collections had the watch in a round case, but this time, Corum takes the rectangular approach.

But before we look forward, let’s look back a bit. Introduced 4 decades ago, the Golden Bridge was more than just eye (wrist) candy. It featured an in-line baguette movement that was a technical marvel, in addition to looking fantastic. Movements are typically built on a flat plane and can take up a lot of the space within the case. That is valuable real estate, indeed, and manufacturers want to make the most of it. But Corum is not like all manufacturers. “The Golden Bridge became an icon in watchmaking because it was the first watch to be fully transparent showing the work of the watchmaker and the beauty of the mechanics.“ Elizabeth Doerr, Watch Journalist & Editor-in-Chief of Quill and Pad.

The baguette movement in the Golden Bridge looks like a column of sorts, right in the middle of the case. The space to each side of the movement can be used for different artistic expressions. The 2016 model, for example, had architecture-inspired bridgework, perhaps inspired by another Golden bridge structure. Corum has taken different approaches with that space in the 2 models in the homage collection this year. And each one is impressive. Both manual watches are powered by the CO 113 movement, have hour and minute functions, and a power reserve of 40 hours. An improvement on previous collections, these models are water-resistant to 30 meters.

Crossing the Bridge
All the Corum watches are intricate and beautiful to look at and the Golden Bridge Rectangle is no different. The Golden Bridge Rectangle (reference no. B113/04166 – 113.054.55/0F02 0000R) in rose gold is a fitting piece to honor both the Golden Bridge’s 40th anniversary and the 65th birthday of the brand itself. This 18-carat rose gold watch has a brown alligator strap with it, and the combination gives a sort of vintage, classic look. That is, until you look at the dial. The movement CO 113 is on full display even with the backdrop of the Corum key pattern.

The second watch in this collection is the Golden Bridge Rectangle Hand Engraving (reference no. B113/04167 – 113.055.59/0F03 0000G). The hand engraving on this 18-carat white gold model is exquisite. The floral engraving is delicate and as the brand details, “The acanthus and fern plants are a nod to the “Style Sapin” created in La Chaux-de-Fonds.” This Golden Bridge watch is made even more intriguing by what is and isn’t there.

What is there is an intricate masterful piece of art that is the movement. What else is there is space, a lot of it, because of what isn’t there – a stereotypical dial. Some models have the baguette movement with a stylized dial built around it, and others have the baguette movement and lots of space, glorious space. Looking at this Golden Bridge Rectangle full-on from the front is already amazing, but tilt the watch just a bit to see the full creation. The blue alligator strap is a perfect complement to this Golden Bridge Rectangle watch – the white gold and blue create a pristine palette so pleasing to the eye.

A Tale of Two Bridges
Both Golden Bridge Rectangle watches are exquisite in their own right. As befitting homage pieces, each model is a limited edition. The rose gold model is a limited edition of 40 to honor the collection’s 40th anniversary. Each will have “Limited Edition 1 0f 40” engraving inside the watch case at 3 o’clock. The white gold model is an even more limited release of just three pieces, in honor of the three founders of Corum.