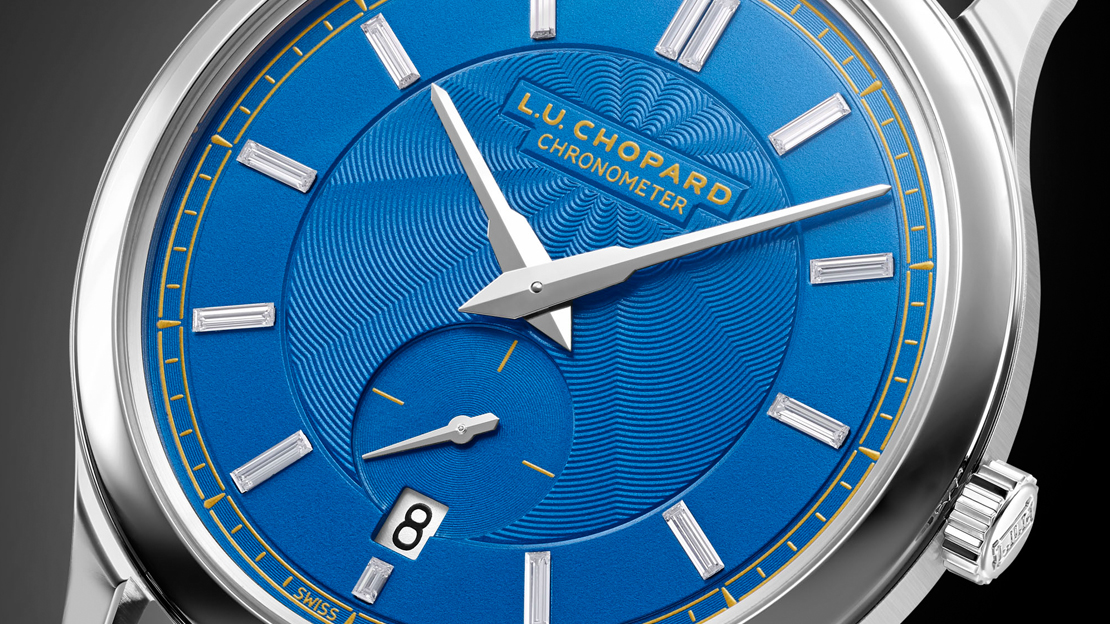 THE red carpet at Cannes had been rolled back into its musty storage, the champagne bottles emptied dry, the paparazzi long gone; this year’s edition of the international film fest ran through most of May. Which means this sunny slice of the French Riviera, most likely, has gone back to its normal ways.

But the glamour associated with Cannes — both the film spectacle and the city — lives on in many things. It is a point difficult to disagree with when referring to Chopard’s L.U.C. XPS Azur.

Chopard brought out this 10-piece limited-edition take on its coveted XPS line as a way to draw attention to its role as a partner to the Cannes International Film Festival. But the aesthetics of the L.U.C. XPS Azur — as Chopard itself points out — is more evocative of the French Riviera.

As an XPS the watch is understated and pared-down, even classical. In its Azur rendition though it gets a splash of color by way of a dial in azure blue. The center of the dial, just below the baguette-cut hour markers, is decorated with guilloche (hand-applied, of course) whose pattern seems to radiate from the top in wave-like forms. Finished in azure, the effect is nautical.

A small second dial at 6 o’clock, with only three gold small markers within it, add a bit of complexity to the patterns because its surface is decorated with miniscule concentric rings. Even the date window that straddles the bottom of the small second register and the unadorned periphery of the main dial becomes a necessary element to the watch’s symmetry. Take this away, as most watch guys would reflexively demand, and the effect would be one of nagging doubt — as if something is missing. Thick dauphine-style rhodium hands provide strength, if not masculinity, to the design. A subtle minute railroad track in gold ties the dial furniture neatly.

Framing all this is an equally elegant case. Measuring 40 millimeters wide it is neither shouty nor dainty. Its 18-karat white-gold construction boosts its appeal as some sort of a “sleeper” watch.

Well, the gold-tone “L.U. Chopard Chronometer” inscription is enough of a telltale sign among the learned that the L.U.C. XPS Azur is no run-of-the-mill luxury piece.

The “L.U.C.” is the dead giveaway, actually. Because since the first L.U.C. of 1996 the movement residing within watches bearing these initials is considered as among the best ticking Chopards. In the XPS Azur this is the L.U.C cal. 96.01-L, an ultra-thin (3.3 millimeters high), 29-jewel movement wound by a 22-karat gold micro-rotor. Oscillating at 28,800vph, it packs power good for 65 hours. This generous power reserve comes courtesy of two mainspring barrels — or Chopard’s proprietary Twin technology. And, as stated on the watch’s dial, this is a COSC-certified chronometer, too.

The L.U.C cal. 96.01-L is visible through a sapphire crystal glass on the caseback window. And with good reason; because this movement is as sophisticated as the dial itself. It is lavished with the Poinçon de Genève hallmarks. Its bridges are clearly chamfered. Adorning these are Geneva striping. The mainplate is chamfered, too, and finished with circular graining.

With the L.U.C. XPS Azur, Chopard really does glamour right.