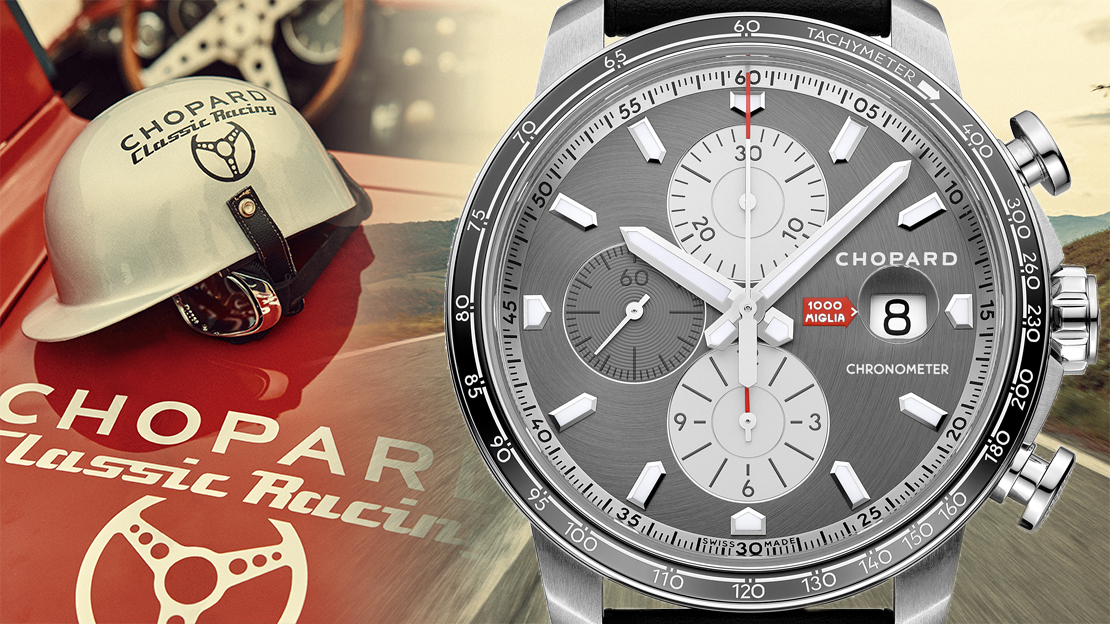 For the 34th consecutive year, Chopard is proud to once again participate in the celebrated 1000 Miglia car rally as the historic event’s main partner and official timekeeper.

The 2021 1000 Miglia, run from June 16th to 19th, will see the usual direction of the course reversed, meaning the 375 entries will travel the 1,618 km route (1,005 Roman miles) in a counter-clockwise direction. This has never happened since the competition was revived in 1977 but was a regular occurrence during the early editions of the original race between 1927 and 1957.

Gentleman drivers, camaraderie and friendship
For the 34th time, Chopard Co-President Karl-Friedrich Scheufele will demonstrate his passion for driving classic cars by taking his place on the start ramp, this year behind the wheel of the distinctive, strawberry-red Mercedes-Benz 300SL ‘Gullwing’ that has been part of the Scheufele family collection for more than 40 years.

Beside him will be motorsport legend, six times Le Mans winner and long term friend of the Maison Jacky Ickx, with whom Mr Scheufele has driven the 1000 Miglia on more than 15 occasions.

Mr Scheufele first competed in the 1000 Miglia in 1989 – in the very same Gullwing and also with Mr Ickx as his co-pilot.

It was that first outing together that formed the basis for the friendship between these like-minded ’gentleman drivers’ that epitomises the spirit and camaraderie for which the 1000 Miglia has always been renowned.

This year, the duo will lead a team of five Chopard cars, including an Ermini Sport 1100 and a Fiat 1100 Zagato Coupe (both dating from 1954) which will be driven by a variety of guest crews including French endurance racing champion Romain Dumas.

A long and winding road
In keeping with tradition, the rally begins at 1.30pm with the oldest car leaving the start ramp in Brescia’s tree-lined Viale Venezia first, and the others following at one-minute intervals in order of age.

Day One will see the cars take on the challenging Cita Pass on the way to a finishing point in the coastal city of Viareggio, with an early start on Day Two to cover the 350km route to Rome via numerous historic hill towns and tiny villages.

The third day promises to be the most challenging and exciting of all – a 400-km run through the ‘boot’ of Italy punctuated by a stop in the dramatic city of Orvieto before the drivers press-on through the Chianti wine-growing region and on to the twisty and demanding roads of the Futa and Raticosa passes.

After an overnight stop in Bologna, the fourth and final day will take the crews back to the finish in Brescia via Modena – home to the great Italian car brands Ferrari and Maserati – and the operatic centres of Mantova and Verona.

Before the start of the race, each crew is presented with a unique, numbered edition of the watch which this year takes the form of a 44-mm chronograph which will be available to buy in two versions: a 1,000-piece, all-steel model or in 250 examples with bezels, pushpieces and hands made from ethical 18-carat rose gold.

Both have slate grey, satin-brushed galvanic dials complemented by sharply contrasting chapter rings and chronograph subdials while red-tipped markers make for optimum legibility. The three-counter set-up enables individual recording of 12-hour, 30 minute and 60-second elapsed times, while speed and distance calculations can quickly be made using the dashboard-inspired, white-lacquered markings on the black ceramic insert of the tachymetre bezel.

As with all of Chopard’s Mille Miglia watches, the 2021 Race Edition’s motoring pedigree is confirmed by the presence of the famous 1000 Miglia red arrow on the dial, while the case back proudly bears a chequered flag design, the ‘1000 Miglia’ logo and the inscription ‘Brescia-Rome-Brescia’ as a reminder of the event’s celebrated, circular route.