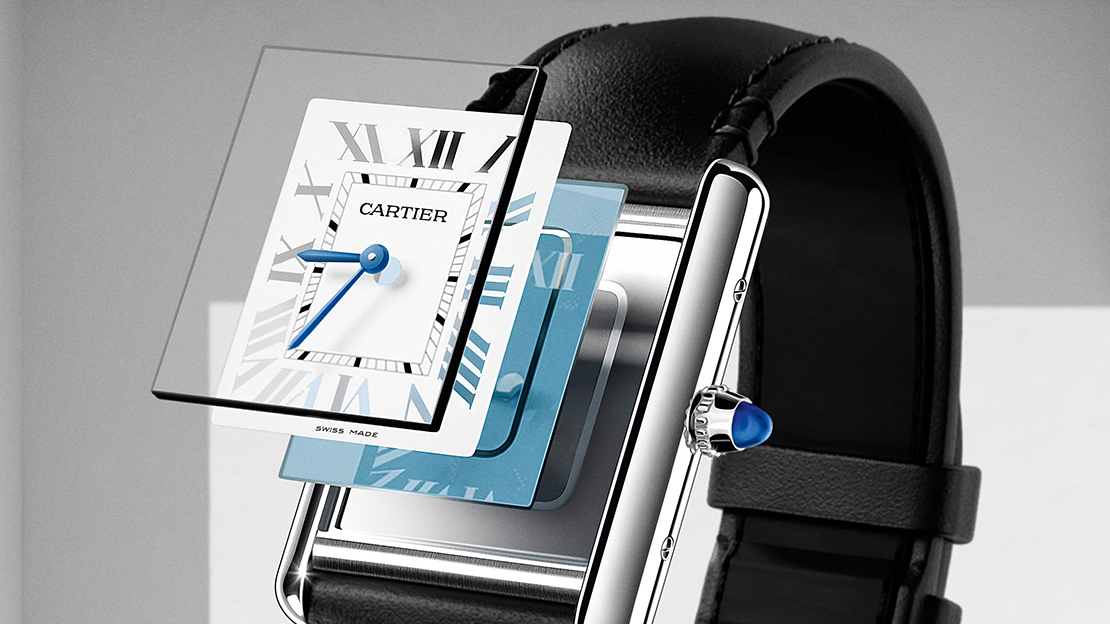 The Tank watch is Cartier elegance embodied, a pure and precise design, an uncompromising line. From itsvery creation in 1917, Louis Cartier made the distinct aesthetic choice of a rectangular shape, as opposed to the round watches of his generation. The Tank was already an avant-garde piece when launched and continues to be today. The two parallel brancards are its signature. Inspired by the design of a combat vehicle viewed from above, this watch follows one clear graphic principle: the brancards were the treads, the case was the turret. For the first time with the Tank, the case attachments were aligned with the strap to maintain the rhythm of the design.

Wearing it becomes a statement. Vanguard Andy Warhol and his Tank were inseparable, he said about it: “I don’t wear a Tank watch to tell the time. Actually, I never even wind it. I wear a Tank becauseit is the watch to wear!” By refusing to wind hiswatch, the leader of pop art sanctifies the elegance of the Tank.

TANK MUST
Timeless, sure of itself and of the purity of its design, the Tank watch captures the zeitgeist in 2021. Aftermore than a century, it has been reinvented with the Tank Must. Tank and Must, the fusion of two Maison icons: on one hand, Tank, essential and dandy, andon the other, Must, a name immortalised at Cartier in the 1970s that revisits the classic conventions of luxury. “The Must watches are part of the Maison’s heritage and legend (…). They have withstood the test of time thanks to their instantly recognisable style, but also their excellent craftsmanship, which Cartier applies to all its creations right down to the smallest detail.” Pierre Rainero, Director of Image, Style and Heritage at Cartier.

Tank Must is a chic watchmaking feat worn by many. A Maison signature whose design and movements are continuously evolving, driven by Cartier’s watchmaking commitment to constant progress. The Design Studio has reworked the design of these new Tank Must with monochrome versions and an original version based on a new photovoltaic movement.

TANK MUST: AN EVER-EVOLVING DESIGN
Taking direct inspiration from the Tank Louis Cartier, the design of the Tank Must has been developed while staying faithful to the historic model. Rounded brancards, revisited dial proportions: finesse is the guiding force behind this new design. A watch that dares to return to great classicism down to the smallest detail, with a precious pearled cabochon winding crown and the return of a traditional ardillon buckle on the leather strap version.

A watchmaking classic from the Maison whose sophistication is measured on every level, from its steel strap with curved links, entirely redesigned and interchangeable, to the latest high-efficiency quartz movement-autonomy of around 8 years.

TANK MUST: A PIONEERING WATCH THAT INTRODUCES A PHOTOVOLTAIC DIAL AND A BRACELET PRODUCED WITHOUT ANIMAL MATERIALS
Since the very beginning, Cartier’s watchmaking ambition has been to constantly strive to improve, relying on technical progress as well as the Maison’s response and commitments to the environment and biodiversity. Pioneering since the invention of the first watch worn on the wrist with the Santos watch (1904), or the one with thefolding buckle (1910), Cartier Watchmaking has always been committed to anticipating its clients’needs. Whether it’s the QuickSwitch patent (2018), which allows straps to be interchanged at home, or the latest photovoltaic dial found on the Tank Must watch, a modern alternative witha quartz movement with no need to change the batteries, the approach is the same; improve thelives, and satisfaction, of Cartier’s clients.

The challenge lies in applying a new technique to the watch’s aesthetic and shape every time, finding a confluence between modernity and watchmaking tradition, a challenge and commitment crystallised by the Cartier Manufacture at La Chaux-de-Fonds. More than simply a production site, the Manufacture is a research hub, a creative and innovative laboratory that has succeeded in applying the photovoltaic principle to the Tank watch’s dial, without altering its aesthetic. A true technical feat that relies on the delicate and invisible perforation of Roman numerals, whose openings allow solar energy to reach the photovoltaic cells hidden under the dial. It took two years for the development team to integrate this SolarBeatTM movement, with a lifespan of over 16 years, into the Tank Must, the first watch to benefit from this technology.

A pioneering watch that also introduces a bracelet produced in an innovative material that guarantees a high level of both quality and comfort. It is composed of around 40% plant matter, produced using waste from apples grown for the food industry in Switzerland, Germany and Italy.

The production procedure represents a step forward in preserving the environment by reducing our carbon footprint (6 times less), saving water (up to 10 litres) and energy (up to 7 megajoules, or approximately 80 smartphone charges) compared to the manufacture of a calfskin strap.

We’ve taken a local, European approach: the apples are grown and their waste collected in Europe, from the material production site in Italy, to the strap maker in Portugal and the watch assembly in Switzerland.

Loyal to its reputation as an avant-garde timepiece, the Tank watch hasn’t quite finished telling us what it has to say. Its creativity is limitless. Once again with the Tank Must, Cartier dares to make its timepieces evolve with the times while looking towards the future.