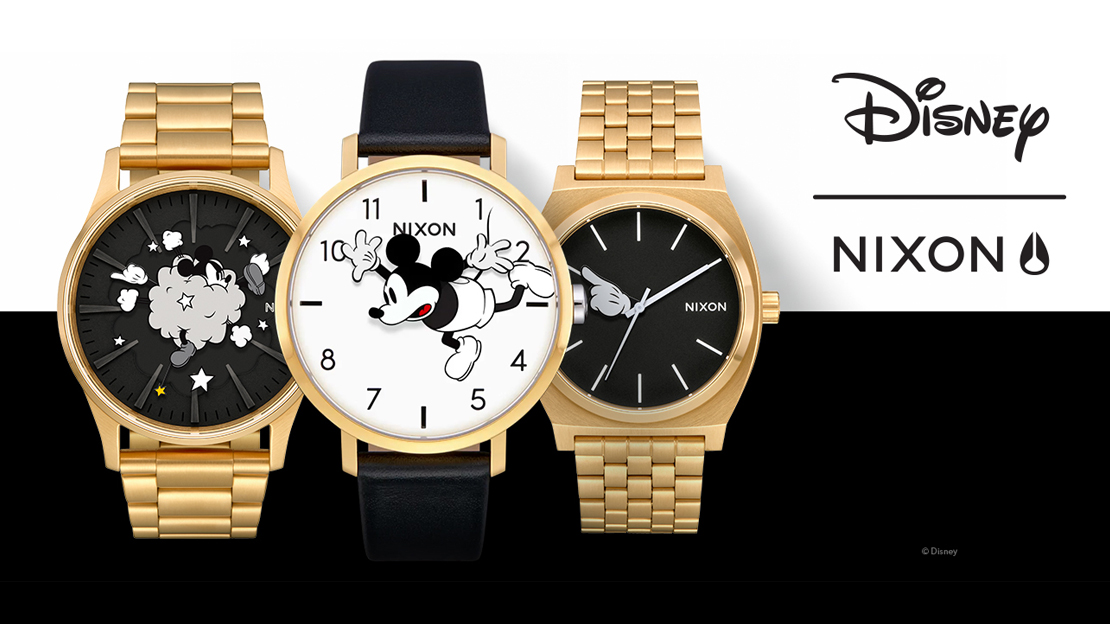 Mickey Mouse turns 90 this year, and Walt Disney’s funny little rodent is looking as rakish as ever.

It’s something not lost on global watchmaker and accessories brand Nixon. The California-based company is known to form collaborative efforts with groups as vibrant as it is, and one only has to look at its recent involvements with beach culture apparel maker Amuse Society, dive suit and active wear brand Abysse, and even rock icon Metallica to discern Nixon does thrive in such alliances. And so it comes as no surprise that it has linked up with The Walt Disney Company in a project meant to celebrate Mickey’s latest milestone.

What Nixon turned to, in line with Disney’s “Mickey The True Original” campaign, is the Mickey Mouse Watch.

Launched at the 1933 Chicago Exposition “Century of Progress,” the Mickey Mouse Watch was one of Disney’s first licensed products. It was built by American watchmaker Ingersoll-Waterbury, and it proved to be quite a huge success that it opened up tremendous merchandising possibilities for the Disney company (Oh, it also brought back to life Ingersoll-Waterbury, which was still reeling from the Great Depression at the time). More than five million pieces of this watch was sold in the 15 years after its launch, and from then on saw numerous iterations.

Nixon’s is the newest. And it has put its own lively spin on the iconic watch, as seen in the brand’s new collection. Mixing together classical elements and the edgy designs for which Nixon is known, the watches get both unique multi-layered dials and details that would not escape the attention of dedicated Mickey Mouse fans.

For instance, the Arrow Leather piece’s strap has eyelet holes shaped like mouse ears. The custom-locking looper holes on the Time Teller P are actually shaped like Mickey Mouse’s buttons. Nixon also found several fun ways in which to incorporate the “90” in some of the watch models—the number appears on crowns and clasps, and in a couple is even used to mark nine o’clock. In short, the Nixon Mickey Mouse Watch re-imagines the look of the Disney legend.

The introduction of the watch collection—made up of The Sentry SS Dust Up, The Sentry Leather Look Out Below, The Corporal SS Hand Over Fist, The Time Teller One Glove, The Time Teller P Dust Up, The Arrow Leather Long Way Down, and The Kensington Leather Essential Elements—is accompanied by a line of Mickey Mouse bags. Composed of six models, the bags are made from nylon and adorned by translucent Mickey Mouse icons that mimic printers’ CMYK registers. Like the watches, then, the bags are fun but also offbeat pieces that capture Mickey’s heritage, personality and status as a pop-culture icon.

Nixon’s “Mickey the True Original” collection of watches and range of bags are now available at www.nixon.com.