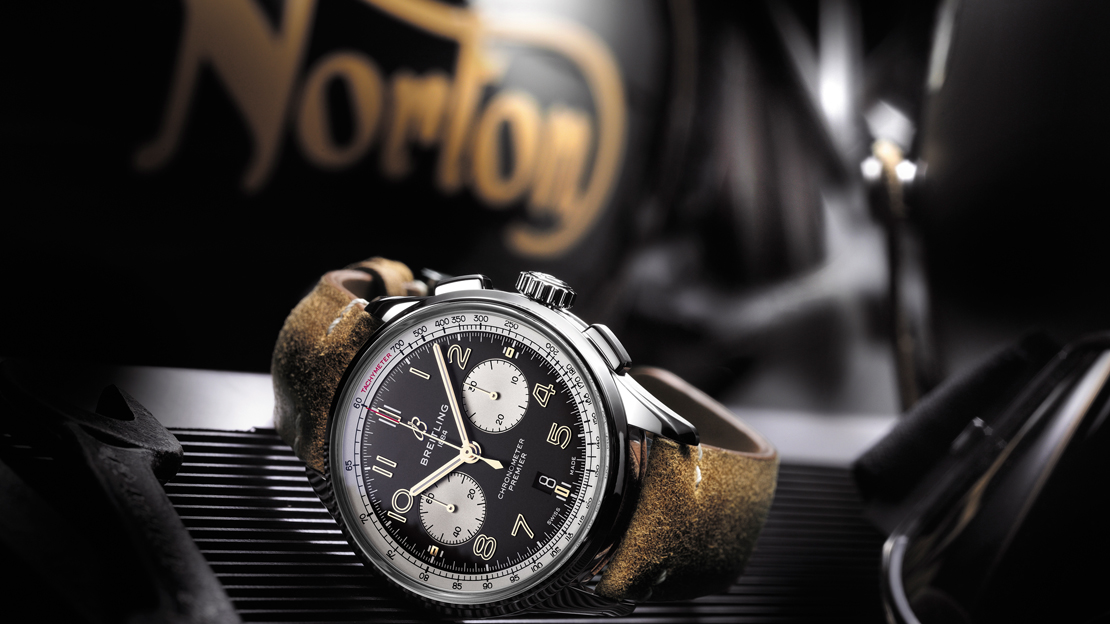 BREITLING’S affinity with Bentley is pretty well established; this stretches back to 2002 when the carmaker wanted a special dashboard clock for its then-upcoming Continental GT. Its relationship with another British marque is more recent though, having started only in 2018. But this new tie-up is as equally matched. Both companies started making their wares in the 19th century, and both were named after their founders. What is being referred to here is the partnership between Breitling and Norton Motorcycles. And the initial result of this union is the Breitling Premier B01 Chronograph 42 Norton Edition.

The Norton watch rides the same path as the one taken by a couple of Breitling-Bentley collab pieces in the sense that it appropriates brand signatures into the Premier B01 Chronograph 42. Examples of these Bentley-themed chronographs are the model introduced with the revived Premier line’s launch in October 2018, and the Bentley Centenary piece brought out in March.

So defining the Premier Norton Edition are a “Norton” logo engraved on a plate mounted on the left side of the watch’s case, and the transparent caseback on which printed are a Norton motorcycle image and the brand’s logo. Where the watch significantly departs from other Premier B01 Chronograph 42 pieces is by having gold applied Arabic numerals as hour markers rather than stick indices. Rendered in a vintage-y, outlined font, the touch allows the watch a familial resemblance with some of Breitling’s iconic Navitimer models. The Premier’s 42-millimeter-wide case (in steel) brings it close to its illustrious sibling, too.

Just as important, the Norton version of the Premier B01 Chronograph 42 is still spun by Breitling’s seminal in-house self-winding movement, the cal. 01. Used in hundreds of Breitling models (and supplanted by about as many brands), the cal. 01, with its column wheel and vertical clutch, is regarded as one of the best chronographs in horology. Within the new Premier B01, the movement supplies the readout for the 30-minute counter at 3 o’clock, a small second indicator at 9 o’clock and a date window at 6 o’clock. Boasting COSC certification, the cal. 01 spins at 28,800vph and packs a power reserve good for at least 70 hours.

Now, the one other notable thing about the Premier B01 Chronograph 42 Norton Edition is something which isn’t connected in any way to the watch’s workings. The Norton Premier is paired with a Breitling edition Norton Commando 961 Café Racer MkII motorcycle that’s limited to only 77 examples. This bike, while completely identical to other Commando 961 Café Racer MkII models, gets a “B” Breitling logo on the clutch box cover and which is also stitched on the leather saddle, as well as unique dials designed by the watchmaker.

The stripped-down Commando 961 is powered by Norton’s own parallel-twin 961cc engine that embraces old-school cues — it is air- and oil-cooled, and its two-valve-per-cylinder setup relies on push rod and hydraulic activation. The engine is fuel injected, though, and is fitted with a three-way catalytic converter that allows it Euro4 compliance.