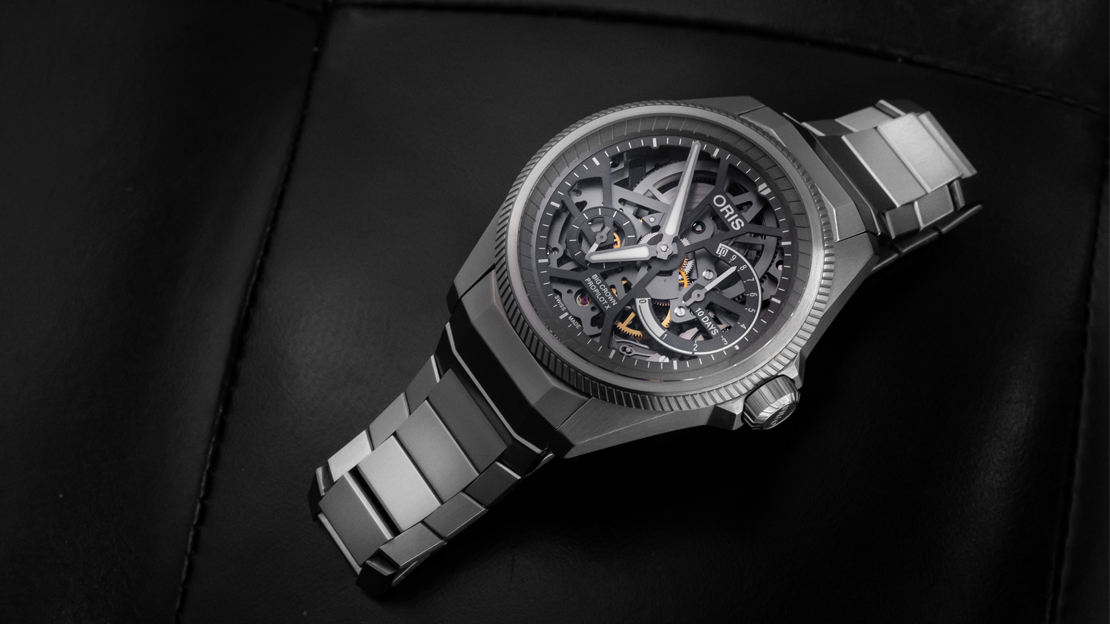 ORIS wants to remind people how things actually work. The happily independent Swiss watch company has launched something that looks both forward and back, both inwards and out, in Shanghai and for the world. The new Big Crown ProPilot X Calibre 115 uses one of their own movements, the ones that have ten days of power reserve at least. In this case, the movement actually has more because the energy use and storage is much more efficient than in their previous watches. As if ten days wasn’t enough.

The new Calibre 115 meets these extremes of energy efficiency because it has nothing it doesn’t need. As can easily be seen, it is a skeletal. It isn’t skeletonized, they didn’t take their Calibre 110 or Calibre 111 and cut into it. It is a true skeleton that used the Calibre 111 design as a base but built with nothing not needed. Look at where the small seconds hand is. It isn’t in the perfectly symmetrical position you might expect. Because moving it down a bit means one less gear, and it isn’t really visually bothersome at all because the whole watch is like a hugely interesting canvas anyway. The added bonus is that the power reserve is longer because less is needed. Even with a slightly shortened mainspring (still over a meter long) the watch will operate two days over the promised ten. Two days. That’s more as extra than many watches have as standard.

Visually the watch is stunning in photos yet somewhat subtle on the wrist. In the photos you clearly see the gearwork and that wonderfully long mainspring that moves as you wind the watch. And it’s even cooler when you look at the back. On the wrist and in person, it is surprisingly readable, as everything behind the hands becomes texture when you are trying to tell the time. The hands are distinct and easily readable, standing out cleanly.

As Oris co-CEO Rolf Studer explained, they didn’t want to make the skeleton design one of flash and intricacy of engraving or texture on the surfaces. No côtes de Genève swirls, for example. The ProPilot X is meant to be an interpretation of aeronautics and aviation, as opposed to the ProPilot line which is a pretty functional pilot watch line. So in the new watch you see lines that are meant to make you think of architectural structures and tensioned lines of airplanes. The bridges are matte grey, rather than polished. Edges are staring not beveled or chamfered. And seriously, as nice as the front is it’s the back of the watch that is truly enchanting to look at. The new bracelet is great, but it means you can’t easily lay the watch flat and just stare at the back for a while. Oh, and while they did a lot of work on the bracelet, and in particular the new clasp, it comes off with ease if you want to put on something like a leather or fabric strap. Lugs are 22mm.

The whole watch is encased very appropriately in brushed titanium, and is quite light of course. The 44mm case is one that looks quite at home with the dialwork. It is a working watch, a tool watch but one that celebrates the honest work of honest tools. As Mr. Studer said, they are from the more German Protestant part of Switzerland. So yes, serious work ethic more than flighty art piece. The design team says they were inspired by the way life is in the Waldenburg Valley in which they live. Nature and culture combine with architecture, and in this case aviation.

Where is Oris going with this new watch? Kind of back to their roots. They’ve always been known for making good solid pieces that represent intelligent luxury. But not luxury in the way most other do, rather the luxury of being at peace with who you are inside. They don’t like the idea that luxury would mean exclusivity, because they want to include rather than keep away. And they say that much of the modern world feels the same way. They point to the successes of their bronze watches, which are made not from a precious metal but rather than one that is ages old and will change as you wear it. The modern citizen of the world appreciates the craftsmanship of the past and of real human work, but also lives with technologies that didn’t exist a few years ago. This new watch is clearly a pilot-type watch but not exactly a typical or historic one. It has no numerals for the hours, for example. It’s more like a forward-thinking interpretation of the love for classic aeronautic style.

“Watches are meant to bring you joy,” said Mr. Studer. You must enjoy them, whether it’s because of case design or dialwork or complication or anything else, there must be something that moves you. Even for just three seconds, he said, they should be something that uplifts your day.

And in today’s world, that joy comes quick. The global launch is (or was by the time you’re reading this) at 8pm Shanghai time. Next morning these pieces should available in stores around the world.