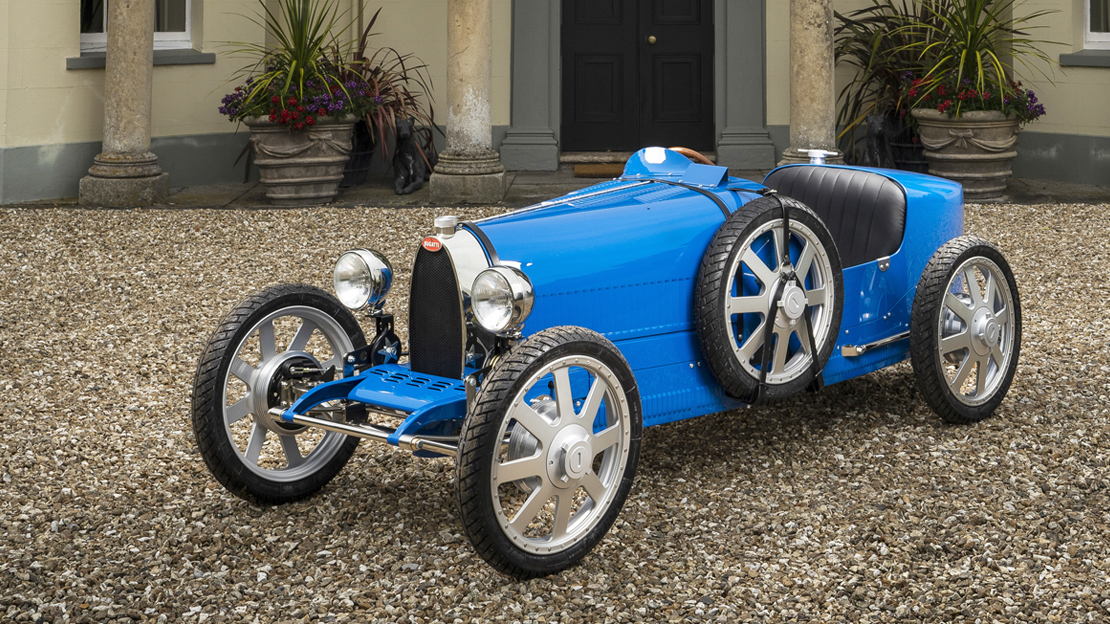 IT CANNOT be mistaken for anything other than a Bugatti Type 35, and one that is in immaculately restored — if not preserved — condition. But placed alongside some objects which could provide scale, there appears to be something not exactly “right” with this thing…

Well, this is because it really isn’t an actual Type 35, but rather a scaled-down version of Bugatti’s iconic car. This one’s called the Bugatti Baby II, a prototype junior car which runs on battery power. Yes, it could be driven.

The Baby II follows after the initial prototype Bugatti revealed earlier at the 2019 Geneva Motor Show. The first version was a 3D-printed model in 50% scale. The car’s limited-edition run of 500 examples sold out within three weeks. The Baby II grows from 50% scale of the original to a 75% scale replica of the Type 35. It also comes with a sliding pedal box so that both children and grown-ups who never really grew up mentally can share in driving the car.

Bugatti, which offered the Baby II to special guests for test-drives during the brand’s 110th birthday bash at La Grande Fete in Molsheim, partnered with The Little Car Company in designing the car.

The first step here was to digitally scan every single component of a 1924 Type 35 Lyon Grand Prix car. From there Bugatti fitted an electric powertrain with lithium-ion batteries and regenerative braking. It also replicated the Type 35’s signature eight-spoke alloy wheels, but these now wear modern Michelin tires. Also reproduced were the front axle, suspension and steering mechanism of the original car.

The Baby II’s cockpit features the classic four-spoke steering wheel and engine-turned aluminum dashboard. The instruments, however, have been changed. Instead of a tachometer, oil and fuel pressure gauges, the Baby II gets a speedometer, battery level indicator and a power gauge — just like the one in the Veyron. The clock used for measuring race performance in the Type 35 was left unchanged while the fuel pressure pump from the original has been digitally replicated and converted into a forward/reverse control. The Baby II is kitted with a horn, a rear-view mirror, a handbrake, headlights and a remote control which disables the car from up to 50 meters away.

Two selectable power modes are fitted to the Baby II. The first is a 1kW “child mode” where top whack is limited to a heady 20km/h. The adult mode switches to a 4kW output. Max speed in this mode is 45km/h.

All right, there is another mode. But accessing this one requires a “Speed Key” — you know, just like the one supplied with the Bugatti Chiron. This mode raises the electric motor’s power output to as much as 10kW and disengages the speed limiter. To cope with the power gain, a limited-slip differential manages the extra torque spinning the Baby II’s rear wheels.

Two removable batteries are available; the standard 1.4 kWh pack and a long-range 2.8kWh version. Range, of course, depends on use and charge level, but Bugatti reckons 30 kilometers is quite possible.

Clearly, this computes to an excellent smiles-per-mile ratio.

Seiko has taken the much-loved diver’s watch and turned it dark as night.

A thrilling yacht race is a spectacular way to end the year and welcome a new decade.

End The Year With A Bounty Of Colors

A diver’s watch is always useful and eye-catching. The movable bezel and the distinct styling make it a go-to watch for the underwater pursuits.

The Atmos Transparente clock lets you see through the glass and into the workings of the clock.