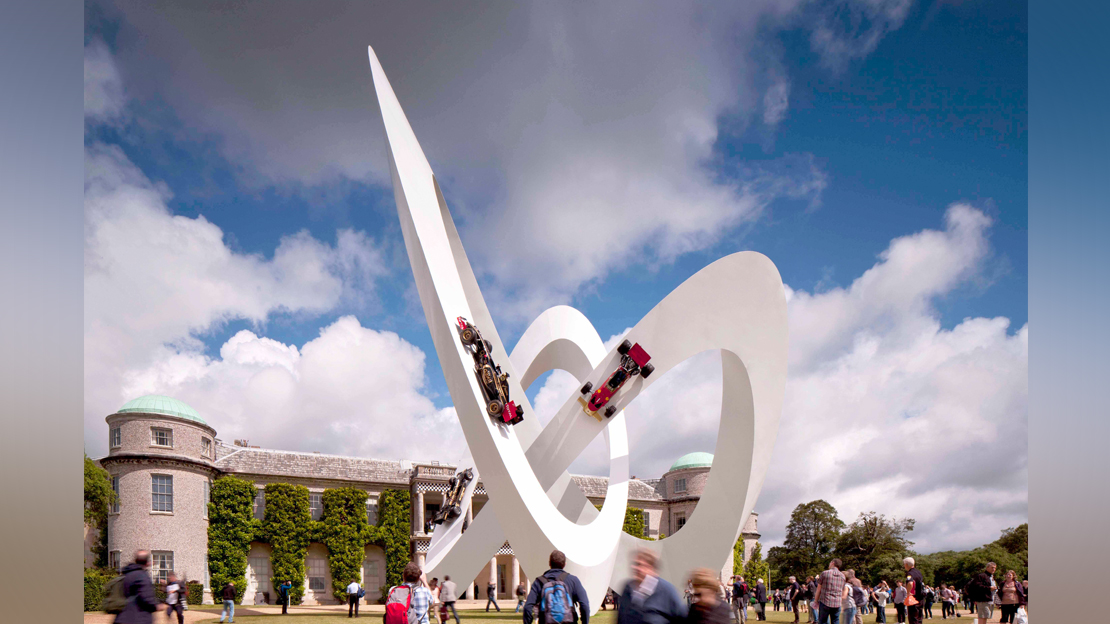 SINCE 1997 the Central Feature sculpture erected on the grounds of Goodwood House for the Festival of Speed has managed to hold its own amid the spectacular array of machinery, which are artworks in their own right. And, like the featured marque that differs every edition, the sculpture is new each year, too.

All 21 previous sculptures were designed by Gerry Judah. Each of these pieces requires as much as 150 tons of steel to build. It can take up to nine months to prepare and complete one. The sculpture to be unveiled on July 4, during the opening day of the 2019 Goodwood Festival of Speed, is no exception.

This year’s Central Feature is dedicated to Aston Martin. The marque is celebrating the 70th year since it first raced at the Goodwood Motor Circuit, and also the 60th anniversary since the brand clinched the 1959 World Sportscar Championship on the same venue. The sculpture, then, promises to be awesome.

Judah’s previous working relationship with Charles Gordon-Lennox, the Duke of Richmond and owner of the Goodwood Estate, led to him becoming the first choice to create the focal point for the then-burgeoning Festival of Speed. But the Duke himself is personally involved with every process in evolving each design.

“There is definitely a form of collaboration with His Grace. Because of our history, there’s a lot of dialogue as we both know where we want the Central Feature to go,” Judah said.

He explains further the process of creating a piece can take anywhere between four to nine months, depending on how soon the featured marque gets involved.

“I will then sit down with the company to get an idea of what they want to express, their spirit and vision,” he says.

Among the most innovatively constructed of the Central Feature pieces are the 52-meter Porsche sculpture last year, which rose from a steel spine just 12 centimeters in diameter, as well as the Lotus artwork in 2015, which was built by welding six-millimeter flat metal sheets together.

But while Judah says it is difficult to pick a favorite Central Feature, he admits the Jaguar E-Type Central Feature of 2011 is special to him. Built to celebrate 50 years of the E-Type, the piece’s “holistic design,” as Judah calls it, was composed of 150 tons of painted 12-millimeter steel and was 28 meters’ high. Just installing the sculpture on the Goodwood grounds took months.

Aston Martin is in good company.