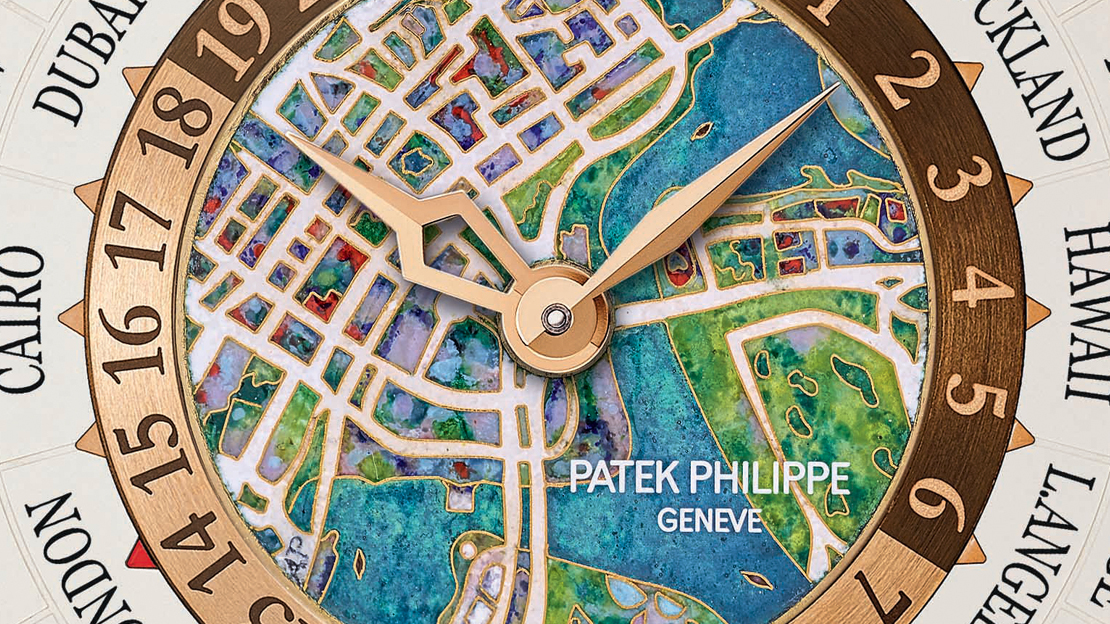 FOLLOWING after those it mounted in Dubai in 2012, Munich in 2013, London in 2015 and New York in 2017, Patek Philippe is now holding its Watch Art Grand Exhibition Singapore 2019 (which runs until October 13). While essentially transporting its manufactory and museum to Singapore’s Marina Bay Sands venue, Patek Philippe also brought out six special timepieces, all alternate renditions of existing models but which get distinct aesthetics that lean heavily toward tastes in this part of Asia. Of course, some design touches specifically honor Singapore, which coincidentally is celebrating the 200th year since British statesman Stamford Raffles established a trading post there.

Ref. 5531R-010 World Time Minute Repeater Singapore 2019 Special Edition
This ref. 5531 for Southeast Asia has its cloisonné enamel dial depicting a map of Singapore, rather than a landscape tableau. And instead of having Beijing on the list of 24 reference cities, the time zone reference has been assigned to Singapore, too.

As a ref. 5531, the Singapore piece — limited to only five examples — strikes the current local time at 12 o’clock, rather than the usual home time. The pair of gongs of the minute repeater are also attached to the caseband, making for unique chimes. This striking mechanism is part of the in-house, self-winding cal. R. 27 HU, a 45-jewel movement wound by a 22-karat gold micro-rotor, and which spins at 21,600vph. It has a 48-hour power reserve.

Housing the watch is a 40.2-millimeter rose gold case adorned by pierced lugs and guilloche on the repeater slide and the caseband. On the sapphire-crystal caseback reads “PATEK PHILIPPE SINGAPORE 2019”.

Ref. 5930G-011 World Time Chronograph Singapore 2019 Special Edition
Limited to 300 pieces, this ref. 5930 is marked by a black-and-red palette — a symbol of vitality, success and good fortune among a number of Asians — rather than the blue dial it has been wearing since the model’s 2016 première. Its list of reference cities has also been altered, with Beijing giving way to Singapore.

Powering the ref. 5930 is the self-winding cal. CH 28-520 HU whose world-time mechanism comes on top of a flyback chronograph with a column wheel, vertical clutch setup. Its chronograph hand can be used as a running second hand without the function affecting the movement’s accuracy or power reserve (which can last up to 55 hours). The 38-jewel calibre beats at 28,800vph and is wound by a central rotor made from 21-karat gold. It boasts silicon balance spring, too.

A 39.5-millimeter-wide case made from 18-karat white gold wraps over all the niceties, chief among which is the gradated, red guilloche dial. Also stamped on the caseback is Singapore commemorative marking.

Ref. 7234A-001 Calatrava Pilot Travel Time Singapore 2019 Special Edition
The blue-gray hue on the dial of this special Pilot Travel Time is pitched as evoking the seas in Southeast Asia, while its 37.5-millimeter-wide steel case can suit slimmer wrists, if not those for ladies altogether. Available in only 400 examples, the Singapore ref. 7234 has an easily adjustable second time zone and date display that are in sync with the local time. As a pilot’s watch, it retains its legible markings even in a medium-format presentation.

Seen through the sapphire crystal window on the caseback — which also bears the Singapore Edition inscription — is the self-winding cal. 324 S C FUS. This 29-jewel movement beats at 28,800vph and can store power good for as much as 45 hours. Its time zone indication is set via pushers fitted with a patented locking system to ensure these would not be pressed unintentionally.

Ref. 5167A-012 Aquanaut Singapore 2019 Special Edition
Red, again, is unmissable in this Singapore special piece that’s available in only 500 examples. On this ref. 5167 Aquanaut, the red strap made from composite material strap is complemented by a red second hand and red minute markers — which are then set against a black dial.

This Singapore edition Aquanaut has a 40.8-millimeter-wide case (as measured diagonally from 10 o’clock to 4 o’clock) made of steel in mixed satin and polished finish. Its distinctly patterned, PVD-coated dial accommodates applied numerals and markers, and hour and minute hands made from 18-karat white gold. All the elements have SuperLuminova coating. Beneath the surface is the self-winding cal. 324 S C that has 29 jewels and a 21-karat gold rotor. It beats at 28,800vph. Its power reserve is reckoned good for up to 45 hours.

A sapphire crystal window cover on the caseback displays this calibre, with the view minimally obscured by the Singapore commemorative marking.

Ref. 5067A-027 Aquanaut Luce Singapore 2019 Special Edition
This ladies’ piece, available in 300 examples, wears a raspberry red PVD-coated dial on which 18-karat white gold numerals and hour and minute hands sit. Its 35.6-millimeter-wide steel case (measured diagonally) is festooned with 46 diamonds on its bezel. Matching the dial is a raspberry red strap in composite material.

Seen through a sapphire crystal window on the caseback (and Singapore commemorative stamp) is Patek Philippe’s cal. E23-250 S C, which boasts a power reserve of three years. Yes, this one’s quartz fired.