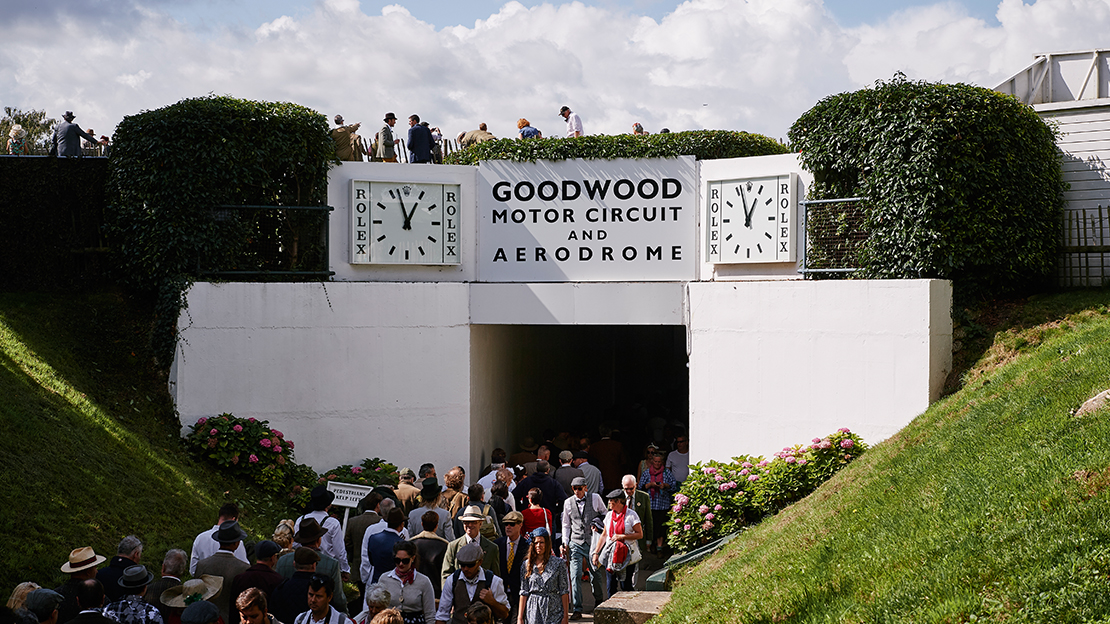 Since 1997, the Goodwood Revival has celebrated the heritage of motor sport, taking a glorious step back in time to the 1940s, 1950s and 1960s. For three days starting this Friday (17–19 September), automobiles and their owners, drivers and spectators will become part of this immersive celebration as the glamour and style of motor racing’s heyday is recreated. Rolex has a profound appreciation for the past and the legends that make up the fabric of the sport; for 17 years, the Swiss watch brand has supported the Goodwood Revival and the Rolex Drivers’ Club, sharing an eagerness to remember and learn from yesteryear.

“The Goodwood Revival is one of the great motor sport events and Rolex has been deeply involved since 2004. It is a journey down memory lane – just look at the array of cars and the incredible style on display. The collection of cars is the best and most expensive in the world and they actually race against each other – this doesn’t happen anywhere else like it does at Goodwood. It is one of the most special gatherings on the global motor sport calendar and Rolex plays a part in that as the Official Timepiece.”

After a year’s absence, the Revival returns in 2021 with many of its crowd-favourite races, including the two-part St Mary’s Trophy for 1950s saloon cars and the spectacular, high-speed Whitsun Trophy. The world’s most valuable grid will line up on Friday as GT cars from the early 1960s race wheel-to-wheel into the dusk in the Stirling Moss Memorial Trophy, renamed in honour of the man known as Mr Goodwood who died last year. On Saturday, there is an exciting one-off addition to the schedule in the form of the John Whitmore Trophy, pitting 30 Mini Coopers against each other in a two-driver contest to mark the car’s 60th anniversary. Tom Kristensen, a Rolex Testimonee, nine-time winner of the 24 Hours of Le Mans and Goodwood regular, says:

“It is a privilege to drive vintage vehicles – some of the cars are older than me, and you really get an in-depth feeling for how the technology has advanced and evolved over the generations. The Goodwood Revival gives us the opportunity to look back and celebrate the heritage of motor sport as well as its ongoing influence on society.”

The 2021 Goodwood Revival is incorporating new celebrations and viewing areas, as well as remembering special moments from Great Britain’s history. To commemorate the 1946 London Victory Parade, a motorcade of 150 military and civilian vehicles will take to the circuit on Sunday, led by a marching group that includes key workers from the armed and emergency services, so crucial to the continuing pandemic efforts. Away from the track, in admiration of the “make do and mend” mindset of previous generations, Woodcote Corner will showcase several restoration projects celebrating craftmanship and sustainability. This year, the Rolex Drivers’ Club – always at the heart of the weekend – will have a new home next to the Earls Court Motor Show, on display to visitors for the first time.

For Sir Jackie, travelling to Goodwood Motor Circuit each year is an opportunity for him to reflect on his career and the circuit’s considerable influence on his life:

“Goodwood is a very special place for me because I went there with my older brother, Jimmy, in 1954, when I was a wee boy. He won the Johnson Trophy, driving an Ecurie Ecosse Type C Jaguar, and I was there to applaud him. Later, during my career, I raced at Goodwood and it changed my path in life, ultimately giving me the opportunity to compete in Formula 1. What’s really special is the fact that my brother drove the exact track I did, and it is still the same for today’s drivers – it remains an incredible challenge.”

In a sport that is all about racing against the clock, the Goodwood Revival is a rare and magical occasion that captures a moment in time, embracing the long-term pursuit for the preservation and promotion of heritage.

For all those involved, it is a unique opportunity to appreciate and reflect on the style, technology and personalities of a bygone era that continue to influence today’s world. Throughout Rolex’s history, the brand has supported those who strive to push the boundaries, and continues to take the time to celebrate pioneering individuals, such as Sir Jackie Stewart and Tom Kristensen, and their enduring legacies.