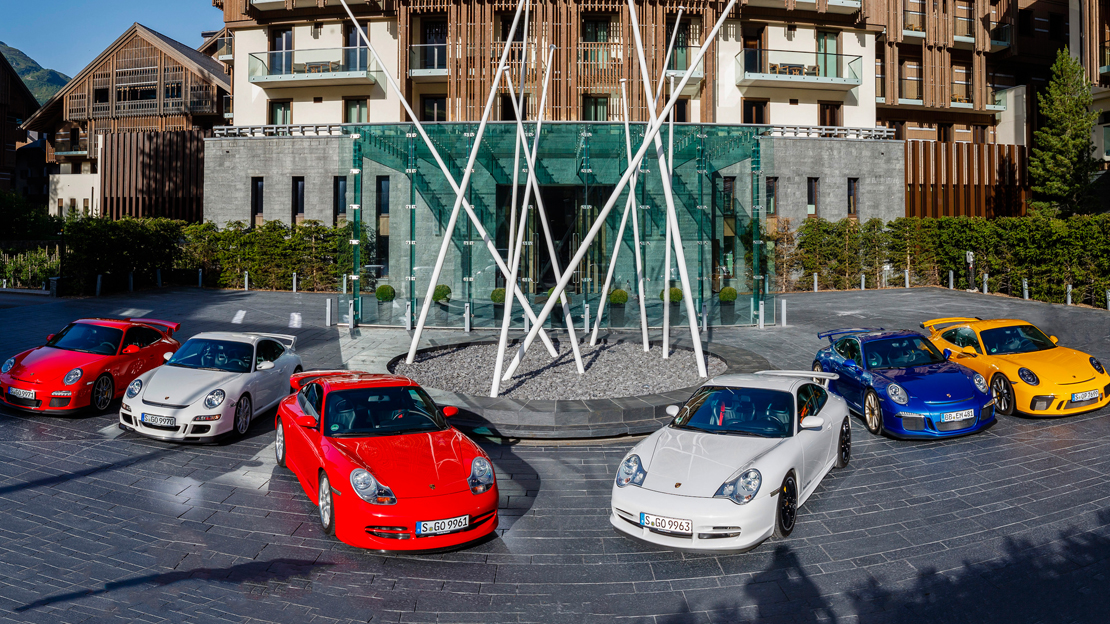 ANY petrolhead will recognize “GT3” as a class in endurance racing. And so Porsche couldn’t have been any more clear about its intentions when it suffixed its track-focused 911 road car with GT3. The 911 GT3 is meant to go racing. Or indulge in track days, at the very least.

Porsche put out the first 911 GT3 in 1999. Since then six versions across three platform generations have appeared. All pack motorsport technology for the road. All have high-revving, naturally-aspirated, retuned flat-six engines and rear-wheel drive. All are stripped-down, have upgraded aerodynamics, and track-focused suspension and brake systems. All are awesome.

Generation 996.1 911 GT3
Launched in 1999 only for Europe, the original 911 GT3 was one of the first production cars to officially lap the Nurburgring in less than eight minutes: rally legend Walter Rohrl posted a time there of 7:56.33 minutes. The car was 30 millimeters lower to the ground compared to the rear-wheel drive 911 Carrera models, had a pronounced front fascia, visible side skirts and an adjustable rear wing.

Powering the car is a 355hp, 3.6-liter flat-six derived from the Le Mans winning 911 GT1 racecar. A six-speed manual transmission bolted on to the engine. The car wore staggered-width 18-inch footwear and had larger brakes, limited-slip diff and tweaked suspension. It deleted air-conditioning and rear seats.

The car’s fascia was restyled, was fitted with a new rear wing, updated wheels, and wider front and rear tires. Larger front brake rotors were also installed. The Porsche Ceramic Composite Brakes was offered as an option.

Generation 997.1 911 GT3
Unveiled in 2006. It was still powered by a 3.6 liter naturally-aspirated flat six, but horsepower rose to 415. The six-speed manual transmission remained, though with shorter shift throws. The suspension allowed for more adjustment, like camber angle. The Porsche Active Suspension Management (PASM) was also fitted as standard for the first time on a GT3. With it comes electronically adjustable dampers. Wheels grew to 19 inches, as did the brake rotors front and rear.

This car also became the first 911 GT3 to come with traction control, still complemented by a limited-slip differential. A “Sport” setting reduced backpressure in the exhaust and relaxed the traction control.

As a 997, the car had new styling. It had an air outlet in front to extract air from the front center radiator and increase downforce. The model featured center-mounted tailpipes.

Generation 997.2 911 GT3
Besides a facelift, the car’s engine displacement increased from 3.6 liters to 3.8 liters, with output now rated at 435hp and 381Nm. This 911 GT3 adopted more stuff from motor racing, like a new center-locking hubs for the 19-inch wheels and UHP tires. An electronic stability control complemented the traction control and PASM. Dynamic engine mounts were an option. The car lapped the Nurburgring in just seven minutes 40 seconds.

Generation 991.1 911 GT3
Introduced in 2013, this 911 GT3 adopted one of the biggest advancements in performance and technology seen on a road car: the seven-speed Porsche dual-clutch transmission (PDK). While already used in previous 911s, it was tweaked even further for track use. It was lighter and had shorter gear ratios.

Generation 991.2 911 GT3
With a Nurburging lap time of 7:12.7 minutes, the latest 911 GT3 is now around 45 seconds faster at the famed course compared to the original model. The car packs a new 4.0-liter engine developing 500hp and 469Nm, thanks to a new crankshaft, larger main bearings, thicker connecting rod bearings, plasma-coated cylinder liners and an oiling system that supplies oil directly into the feeder bore of the crankshaft. Larger ram air ducts on top of the rear decklid cover let the engine inhale better.

The car has a new front fascia featuring lateral air blades, a special front spoiler lip, a new rear underbody diffuser, and a prominent rear wing which sits 0.8 inches higher than before. Special lightweight touches include front and rear pieces made from lightweight polyurethane and a rear decklid made of carbon-fiber composite. The six-speed manual transmission was re-introduced as an alternative to the standard seven-speed PDK.