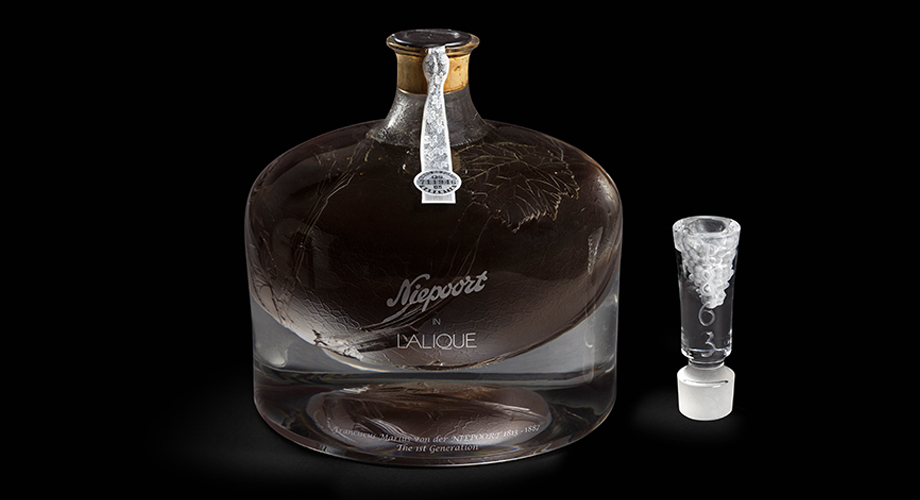 ONE of the finest products of Portugal’s famed Douro Valley—the third-oldest appellation, after Hungary’s Tokaj and Italy’s Chianti regions—has received a receptacle worthy of its exalted status.

Through a unique collaboration, the first Niepoort Port created by Francisco Marius van der Niepoort in 1863 at the winery’s—or shipper’s—cellar in Porto, Portugal now fills five demijohn decanters created by renowned French glassmaker Lalique. Called Niepoort in Lalique 1863 decanters, each of these are engraved with the name corresponding to one of the five van der Niepoort generations which have nurtured the port house bearing the family crest. Each of these decanters is signed “Lalique,” and each one is numbered.

On November 3 the first of these five-generation decanters will be auctioned off by Acker Merrall & Condit in Hong Kong.

The 155-year-old vintage port contained in the Lalique demijohns came from an original Niepoort decanter filled in 1905. The bottle’s design is based on the brand’s 11-liter demijohn of the era, described as “refined, simple and elegant in shape, with a masculine and weighty quality.” It was created using one of the oldest glass production methods—cire perdue, or “lost wax,” a technique learned and passed down through generations of skilled craftsmen, and which is still used by artisans in Lalique’s Alsace, France maison.

As an added detail, the Niepoort in Lalique 1863 decanters set to go on auction will be presented in a bespoke Macassar ebony wood cabinet with grape pattern crystal inlays, also created by Lalique.

“We only have one demijohn from 1905, which contains one of our first wines, 1863. It is an incredibly rare port, the result of years of dedication and craftsmanship. A big wine, but very refined, not too sweet but highly concentrated. It is the oldest port we have ever bottled, and we wanted to do something very special with it,” says Dirk van der Niepoort, a fifth-generation family member who runs the company today.

And the executive couldn’t have chosen a more suitable partner. Lalique, also family-run for decades, boasts a history of collaborating with prominent wine and spirits houses, having had produced special decanters for Clos Saint Odile, Patron Tequila, Beluga Vodka, Grand Marnier and Cognac Hardy, among others. Lalique’s decade-long collaboration with The Macallan was equally notable as it is considered a key factor in The Macallan “M” Imperiale, which came in a Lalique six-liter decanter, having notched a record in January 2014 for being the most expensive whisky ever sold at auction. It hammered at $628,000.

“The collaboration with Lalique is a truly momentous occasion to commemorate our remarkable journey over five generations. Lalique mirrors our own values and commitment to creating only the exceptional and it provides connoisseurs and collectors with an opportunity to acknowledge the distinguished history of the two houses,” says van der Niepoort.

For his part, Silvio Denz, chairman and CEO of Lalique, says; “We have created a highly collectable work of art, which marries the two houses and is deserving of one of the greatest wines in the world. Masters in their respective fields, Lalique and Niepoort are joined by mutual respect and an unwavering commitment to craft, artistry and beauty, and going beyond the ordinary. Our master craftsmen put all of their savoir-faire and passion into producing each piece.”

A toast, then, is clearly in order.

The Old World Through New Eyes

Metrobank invites you to see the past anew.