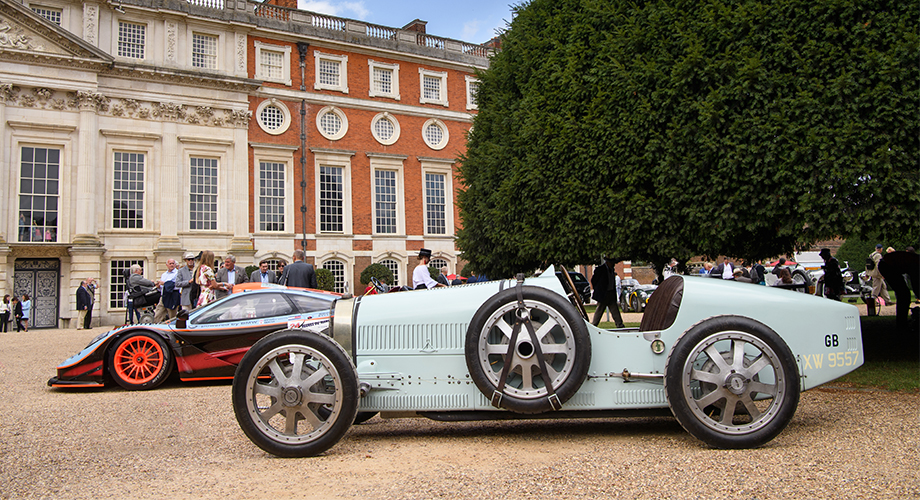 Its first edition was held in 2012 at Windsor Castle, having been part of the festivities meant to celebrate the 60th anniversary of the Queen’s coronation. In this short period the Concours of Elegance has already earned for itself a spot alongside the most prestigious automotive events in the world.

On the weekend of August 31 to September 2 the Concours of Elegance 2018 returned to Hampton Court Palace, having been held there in 2014 and 2017—from Windsor Castle it moved to the Royal Palace of St. James in London (2013), the Palace of Holyroodhouse in Edinburg (2015), and to Windsor Castle once more in 2016. Judging by venues alone, it’s obvious this concours is fit for royalty.

The cars are just as aristocratic. Paraded at the immaculate Fountain Gardens of Hampton Court Palace were, among others, nine different variants of the Aston Martin DB4 (DB4 prototype, DB4 Series 1 to 5, original DB4 GT, DB4 GT Zagato and DB4 Bertone Jet), a freshly restored McLaren F1 GTR Longtail, and the Mercedes-Benz S-Type Barker Tourer “Boat Tail” that came fitted with a revolutionary lightweight and aerodynamic shell body, aluminum side pods, and even an altimeter. This special Mercedes-Benz has not been seen in the UK in a generation.

Two of the concours’ features proved to be popular among the guests. The first was Future Classics, which highlighted cars deemed to be Concours of Elegance stars in the years to come. Leading this lineup was the completely bespoke Rolls-Royce Sweptail that was the first fully in-house designed and coach-built Rolls-Royce in half a century (bespoke are both its body and interior). The Sweptail was joined in this roster by the Aston Martin Vanquish Zagato Speedster (of which only 26 were built), the McLaren Senna chassis number one, and the Aston Martin V12 Vantage V600 (only seven examples exist).

The other top attraction was the new Harry’s Garage display, which was curated by the founder of the Harry’s Garage YouTube channel and Evo magazine’s Harry Metcalfe. This collection was made up of the fastest super sedans in history, with the Jaguar XE SV Project 8, Aston Martin Rapide AMR, Lotus Carlton and the Mercedes AMG Hammer leading the pack.

Other crowd drawers during the weekend spectacle—which saw nearly 1,000 of the finest cars on the planet—were the unique Jaguar models displayed on Saturday, the equally exceptional Bentleys that gathered on Sunday, as well as some coach-built Ferraris, race-winning endurance racing legends and pioneering vintage cars. The Octane Tour also added a diverse collection of vehicles during the event.

Worth a special mention is the Alvis Speed 25 Drophead Coupe by Charlesworth/Hooper, which secured a prominent place at the main concours display for having clinched the Club Trophy.

Without doubt, the Concours of Elegance aptly crowns automotive glory.